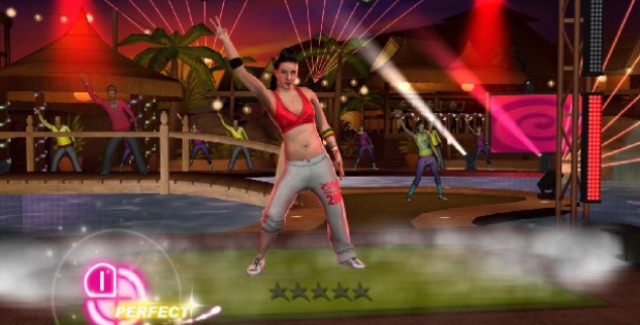 Zumba Fitness 2 has been announced exclusively for Wii (for a time) by Majesco, as the sequel to the hit sensation Zumba Fitness.

The sequel will feature tracks from chart-topping artists Pitbull, Interscope Records artist Nicole Scherzinger and Yolanda Be Cool & DCup. This marks the first time commercial artist tracks will appear in a Zumba Fitness game and complements the full range of contagious tracks created by Zumba Fitness.

“These talented artists are played across the globe because their songs make people want to get up and dance,” said Lisa Roth, Lead Producer, Majesco Entertainment. “We’re excited to pair our exclusive soundtrack with hot new choreography that will kick-start the workout and amp up the fun for millions of Zumba video game fans.”

Zumba Fitness 2 features the hit track “Pause” from international music sensation and Sony Music recording artist Pitbull, whose blended music is a favorite among the Zumba Fitness community. Additional Zumba Fitness 2 tracks announced include an exclusive Zumba remix of “Poison,” the dance hit from former lead singer of the Pussycat Dolls, Nicole Scherzinger, and club favorite “We No Speak Americano” by Yolanda Be Cool & DCup, which has sold more than 1 million copies in the U.S. alone.

In total Zumba Fitness 2 will include over 30 new music tracks from the Zumba program, many created by Grammy-winning producers.

For the first time, players can customize their own class with their favorite routines, follow their improvement through an all new Progress tracker and track calories burned. Whether playing in Single Song, Full Class or Zumba Party modes that support up to 4 dancers, players will have a blast with this unique dance fitness experience that shapes, tones and transforms their bodies and makes them forget they’re even exercising.

Here is a video review talking about the first Zumba Fitness for Wii, with a minute or so of footage at the end.