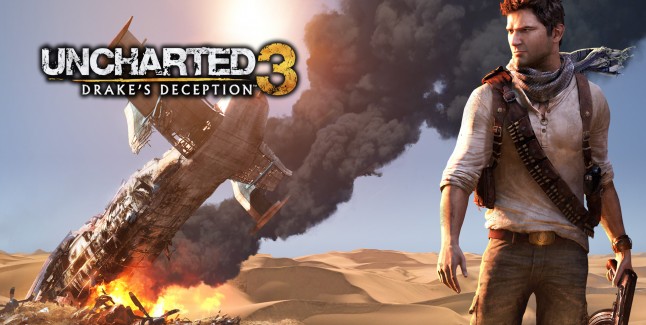 This Uncharted 3: Drake’s Deception preview gives a quick look at what can be expected from Naughty Dog’s upcoming third person shooter, action-adventure game!

Published by Sony Computer Entertainment, Uncharted 3 is the newest installment in the most popular series of the modern generation in gaming! The title is to be released exclusively for the PS3 platform on November 1st (US) and 2nd (EU) 2011!

In this installment, Nathan “Nate” Drake and partner Victor “Sully” Sullivan hunt for the lost city of Iram.

The journey leads them to various locations around the world, including the Arabian Peninsula, Rub’ al Khali desert and the city of London. They are pitted against a shadowy clandestine organization and its ruthless leader, Katherine Marlowe. When the terrible secrets of the lost city are unearthed, Drake’s quest descends into a desperate bid for survival that strains the limits of his endurance and forces him to “confront his deepest fears”.

Take a look at this interview with the creative director Amy Henning in which she talks about the story of Uncharted 3!

Watch the developer walk through at E3 2011.

In this interview, Richard Lemarchand touches all bases.

Evan Wells, the Co-President of Naughty Dog, shines the spotlight on Marlowe (the game’s antagonist) and the beautiful visuals.

In this reveal trailer you can take a peek at the multiplayer gameplay.

And in this interview, game director Justin Richmond talks in-depth about the multiplayer element!

Here is a list of key elements that will be available in Naughty Dog’s Uncharted 3: Drake’s Deception, based on news and announcements made so far.

Advanced Melee Combat & Stealth
The advanced melee combat system allows players to brawl. Naughty Dog stated that players can take on many enemies at once and use the environment against their foes. Whether it’s “grabbing a chair, slamming an enemy into a wall or removing their gun and dispatching them that way” players can imaginatively combat enemies.

There will also be an expanded repertoire of stealth movement! For example, Drake can jump from above for a silent kill. This improved feature allows for “enhanced backward climbing” too.

New Weapons
Gameplay demos have revealed the inclusion of the Sawed Off Shotgun, a new weapon to the series. However, Drake still uses the .45 Defender from Uncharted 2, and an AK47. Sully also uses his signature Wes-44.

New weapons and game types have been confirmed, as well as weapon and character customization! Co-op has again been split into three modes, Hunter, Adventure and Arena and new game modes include “Free For All”, “Three Team Deathmatch” and “Hardcore”. Medal kickbacks and power plays are new additions and the maps are said to be more dynamic on the whole!

Money
The money that players earn during the story mode will be available for transfer to multiplayer, and vice versa. Gamers can make use of their cash to buy new weapons, as well as upgrades for online-play.

Take a look at the official cinematic trailer!

Eagerly anticipating what’s in store for Nathan Drake, Sully, Elena and Chloe? Don’t forget to leave a comment and share your opinion.