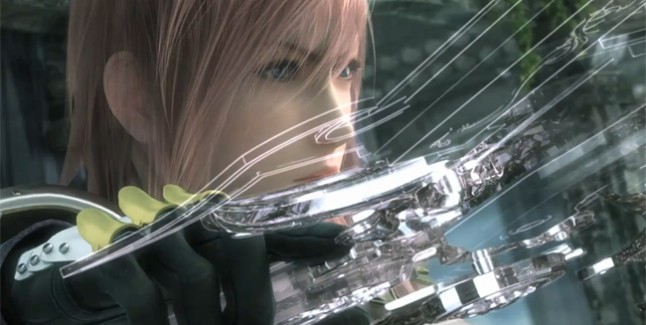 This Final Fantasy XIII-2 preview gives a quick look at what can be expected from Square Enix’s upcoming role-playing game. It’s scheduled to be released January 2012 in the USA, for the PS3 and Xbox 360!

An exact release date for Europe has not yet been specified, though we should see a release early 2012.

A direct sequel to the 2009 role-playing game, Final Fantasy XIII-2 is generating a lot of excitement!

Set five years after the events of Final Fantasy XIII, things have definitely changed! Survivors have already rebuilt on Grand Pulse, and Lightning is presumed dead, though her younger sister Serah is positive she still lives. When New Bodhum is overrun by monsters, the mysterious Noel saves Serah, and together, the two set off to find out what has happened to Lightning!

Watch Motomu Toriyama and Yoshinori Kitase (The Director and the Producer of “Final Fantasy XIII-2”) discuss the game at E3 2011!

In the second part of the gameplay demonstration, we can take a look at the adventure/exploration mechanics.

The gameplay demonstration continues in part 3 of the walk through.

In the last part of this E3 2011 walk through, watch how paradigms and other combat mechanics affect a boss battle.

Here is a list of key elements that will be available in Square Enix’s Final Fantasy XIII-2 based on news and announcements made so far.

Improved Combat Mechanics
The game will again utilize the Active Time Battle (ATB) system and the Paradigm Shift system. But there will be a variety of new mechanics integrated into this system too! For example, difficulty modes can now be changed in battle, quick time events have been added to deal higher damage in combat and players can now tame monsters and use them in party battles.

Mog Clock
The ‘Mog Clock’ feature grants the player bonuses or penalties depending on the time it takes them to battle an enemy. Unlike previous Final Fantasy titles, the monsters in Final Fantasy XIII-2 randomly appear on the field as a player approaches.

Live Trigger
The introduction of the ‘Live Trigger’ system allows the player to select dialogue options when communicating with non-playable characters. These ‘Dialogue Trees’ however have been put in place for enjoyment only, though Final Fantasy XIII-2 will have multiple endings!

Anomaly System
Players will be presented with puzzles in the void between dimensions. Called a ‘Anomaly Session’, if a player can solve the puzzle completely and correctly, a paradox will be solved in the real world.

Check out the official trailer for Final Fantasy XIII-2!

Eagerly anticipating the sequel to Final Fantasy XIII? Don’t forget to leave a comment and share your opinion.

Be sure to check out our Final Fantasy XIII-2 Screenshots!