In our Nintendo Wii U preview we’ll show you the new console in-depth. The Wii U is the official name for Nintendo’s next-generation console and the successor to the Nintendo Wii.

The system was announced officially at the E3 2011 during Nintendo’s Press Conference on June 7, 2011. Previously the system had been slowly unveiled via a number of leaks and news media reports and blog articles, including some of the controller details that make the system unique. Code-names for the system included the “Nintendo Stream”, “Wii HD” and “Project Cafe”.

A release date for the Wii U has not been announced, but it is expected to be released in 2012, giving Nintendo a few more solid months and the holiday season for sell software for the Nintendo Wii, such as The Legend of Zelda: Skyward Sword, a swan-song for that system.

What Is the Price of the Wii U?

A price for the Nintendo Wii U has yet to be revealed, but it is expected that the system will be much cheaper than competing consoles (The Xbox 360 and PS3, or upcoming systems from Microsoft and Sony) despite offering graphics that are on-par. The system’s price will also likely be in line with that of the original Wii, which launched at a price point of $250, where is stayed for a number of years (only recently dropping to a $200 price point).

This video shows when Nintendo unveiled their next video game console, the Wii U.

When is the Wii U Release Date?

The Wii U will most likely launch in the second half of 2012.
An official release date will be announced in June 2012 at E3.

What Are the Features of the Wii U?

Another main and key feature is the ability for the Wii U Controller to stream the entire contents of a game without using the home television. This means that you can switch from playing on the TV, to playing on the Wii U Controller, seamlessly; This idea came from the family unit, and the idea that often times someone wants to watch TV but can’t because another family member is using the TV to play a videogame. Now, you can switch back and forth yet still be playing the same game.

While the Wii U Controller can be carried around the house wirelessly, the main system must remain on (or in standby) and you can only take the controller so far. It is not meant to be taken “on the road”, and thus is not a true portable game system. For that Nintendo wants you to buy the glasses-free stereoscopic 3D Nintendo 3DS handheld system. 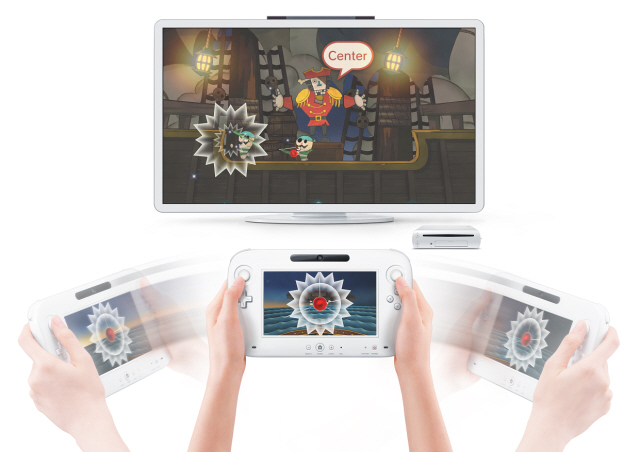 Is the Wii U Backwards Compatible With the Wii or WiiWare?

The Wii U is 100% Backwards Compatible with all original Wii software, controllers, accessories and digital content. This includes all WiiWare and Virtual Console downloadable titles, as well as all Wii controllers including the Wii Remote/MotionPlus/Wii Remote Plus & Nunchuck Controllers, Classic Controller/Classic Controller Pro, and Wii Balance Board. Presumably it works fine with the Wii Zapper and Wii Wheel as well. Up to four Wii Remote controllers can hook up to the system at once. It is unknown if the Wii U supports the GameCube Controller, but we presume it does not as Nintendo does not mention the GameCube at any point in time. And the Wii drive does not have GameCube games listed as a media it accepts.

What Are the Controls, Features and Facebuttons of the Wii U Controller?

The Wii U Controller includes a 6.2 inch (15.7cm) 16:9 touchscreen (singletouch, multitouch is not supported) placed in the center of the controller. At the top left and right of the front are two Analog Sticks (officially called “Circle Pads”), below the left stick is a D-Pad. Below the right stick are four Facebuttons: A/B/X/Y. Four Shoulder Buttons (or Trigger Buttons) are also included, they are the ZL and ZR Triggers, and the L and R Bumpers. The Wii U controller also includes Select, Start, Home and Power Buttons, as well as a Controller Sync Button. A Stylus is also included that slide into a slot on the controller (much like the DS systems) and can be used with the Touchscreen (natch). Additionally, the Wii U Controller also has a Volume Slider, IR Port (that interfaces with the Sensor Bar you’ll have on your TV, just like the original Wii), Headphone Jack, and an AC Adapter port (for charging the wireless Wii U Controller).

Other features of the Wii U Controller include a built-in Accelerometer and Gyroscope (who’s fidelity reportedly beats that of the PlayStation Move Controller Set for PS3), two tiny built-in speakers, built-in front-facing Camera, a built-in Microphone, and a Sensor Strip across the front top.

What Are the Wii U System Specs?

What Medium Are Wii U Games On?

The Wii U plays a Nintendo-developed 25GB propriety disc that they will specifically manufacturer just for the Wii U. This disk, as stated, can hold as much as 25 Gigabytes which is as much as a Sony PlayStation 3 Bluray disc! (which the Wii U was rumored to use before Nintendo officially announced the system). Additionally the Wii U will accept Wii discs as well. However the Wii U does NOT play DVD movies (I assume), CDs, etc. and does not play GameCube discs like the original Wii.

What Wii U Games Are In Development?

Nintendo has several big-name Wii U games in development as do several third-party developers. However most games for the system have yet to be announced. Here is what is known.

What Wii U games and/or features are you most excited about?