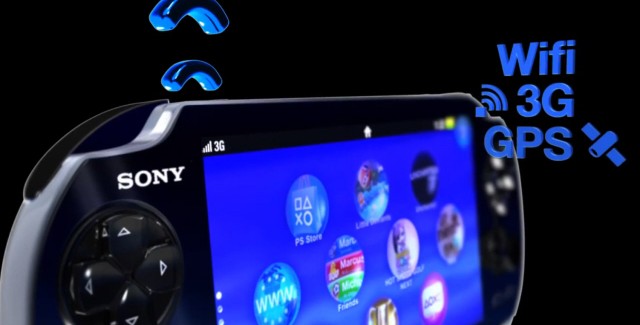 What is new with the PlayStation Vita? PLENTY!

The upcoming system from Sony that is the successor to the PlayStation Portable (and previously known as NGP or Next Generation Portable) greatly builds on what the PSP started and expands it numerous new ways.

In what ways does it improve on PSP, you ask?

Unlike the first PSP, which featured one analog nub, the PSP features two Analog Sticks, making it more in line with console controllers.

Unlike the original PSP, the Vita actually features a touchscreen! This will allow games ported from the 3DS system to the Vita to have similar features, as both major videogame handhelds will not feature a touchscreen (although the 3DS isn’t multitouch). The Vita also has a multitouch touchscreen, just like the iPad! This will make translating iOS games to the Vita easier as well, as they share similar features and similar touch-based controls.

A big focus for Sony with the PS Vita is the fact that the system includes both a front facing camera and a rear-facing camera. These cameras, in addition to allowing you to take pictures (and possibly video) will also allow for Alternate Reality experiences. AR Games are games that use your real-life surroundings (via the camera) as a backdrop for interacting with computer-generated characters or objects. And these types of experiences will be a big push for Sony in the future along with their Near and Party services.

The build-in Microphone will allow voice-recognition and voice-chat in PS Vita games and services, and make it very easy because they are built-in to the system. Naturally, you’ll also be able to use a headset.

The PS Vista has a built-in GPS (Global Positioning System) which allows it to show you where you are, how to get to real-life places, and what is physically near to you.

Near is a new feature of the PlayStation Vista that allows you to see who is around you, and what games they are playing. This further lets you communicate with those people, share Trophies, and otherwise meet, digitally or in-person, people around you who share the same interests in the same videogames as you do!

Party allows multiple people to get together online (or locally) in the same game room via the built-in mic or headset. What’s more, you can chat with whoever is in the same chatroom despite what game either of you are playing! This lets you easily keep in touch with your PlayStation Network friends inside or outside of gameplay, both locally or online!

The Social Features of the PS Vita are shown in this video.

The PS Vita supports the AT&T 3G cellular network with the more expensive $300 model (the $250 model is Wi-Fi only). The 3G model will allow you to access blazing-fast Internet from anywhere in the United States, allowing you to view youtube videos with the web-browser, get on PlayStation Network, play multiplayer games, update Twitter of Facebook, and much more with great speed.

Not only does the PS Vita sport a touchscreen, it also sports a rear-touchpad, allowing you to control the action from both the front or the back of the system! What functionality this will add to games still remains to be seen, but already it is used as an easier and quicker way to control games without having to tap with your finger or a stylus.

Like with the 3DS and iOS systems, the PS Vita features a gyro and accelerometer built-in, allowing you to control games and Apps by simply physically moving or turning the portable system. And this motion control is the same powerful technology that is used in the Dual Shock 3 controller for the PlayStation 3.

What feature of the PlayStation Vita are you most excited about?

This video shows off many of the features of the PS Vita.