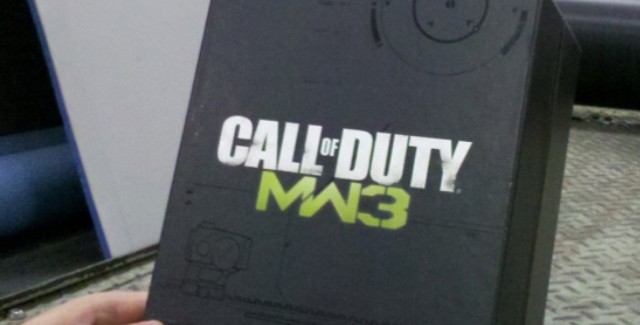 The Call of Duty 3: Modern Warfare Hardened Edition, a special collector’s edition version of the game, has been confirmed (not officially announced per se… yet) by Activision themselves.

Who tweeted out a picture of the Hardened Edition in the hands of one of the developers. Like with Call of Duty: Black Ops, which also received a special edition version including a Hardened Edition, this version looks similar. The Black Ops version retailed for $80, so the Modern Warfare 3 Hardened Edition will likely cost around the same price.

Not only that, but fans who attend the first ever Call of Duty XP 2011 con event in Play Vista, California will each recieve a FREE copy of the Modern Warfare 3 Hardened Edition via a special voucher than can be redeemed after the game launches to get a free copy of the special edition.

What’s included with the Hardended Edition has yet to be announced.

So what about a feature-packed, madass version that contains something totally insane? The Prestige Edition of Call of Duty: Modern Warfare 2 included a real set of fully functional Night Vision Goggles, while the Prestige edition of Call of Duty: Black Ops included a real, fully-functional RC-XD remote-control vehicle modeled after the in-game killstreak reward, which featured a real mounted camera that gave realtime video and audio feedback back to the remote control!

What insane Modern Warfare 3 Prestige Edition craziness will Infinitey Ward and Activision come up with next?

It’s unknown right now, but we will surely learn about it at the Call of Duty XP event. Where fans will also get to see the first fruits of exclusive Call of Duty Elite Modern Warfare 3 content led by production company “dumbdumb”, headed by Will Arnett and Jason Bateman in partnership with Ben Silverman’s Electus Studio, who is developing an all-new content series exclusively for Elite members. Those who attend will also get their first look at a live-action Modern Warfare 3 short film called “We Can Pretend”, from the creators of the Find Makarov video.

What do you think the Modern Warfare 3 Prestige Edition will include? Any ideas?