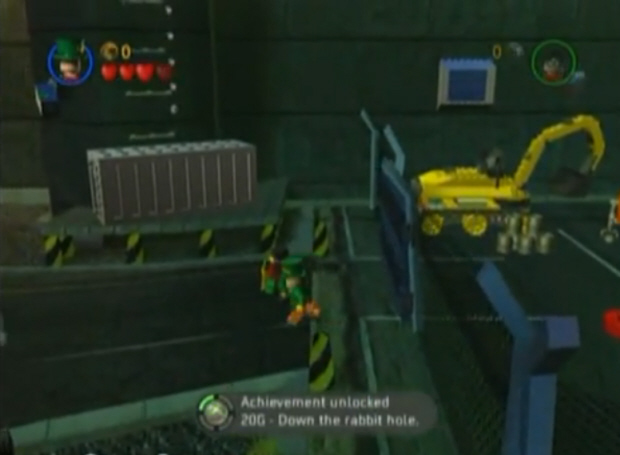 Our Lego Batman Achievements guide (Trophies aren’t in the game) lists every Achievement for this Xbox 360 comic-book based Lego title and tells you how to get them.

Lego Batman is one of the many games that were released before Trophies were built into games and Trophy Support was never added to Lego Batman post-release.

8. Memorabilia (35G) – Collect all Memorabilia. — Collecting all of the Memorabilia in the game will unlock this “Memorabilia” Achievement along with the villain character “Ra’s Al Ghul”.

13. Unbreakable (30G) – Finish a level without dying (Character) with no extras. — This is easiest to do on the first level or the “There She Goes” level with Catwoman or the Killer Moth level.

17. Vigilante (25G) – Rescue 25 civilians. — Be sure to get this “Vigilante” Achievement in Single-Player as many people have problems with the Achievement unlocking in Co-Op multiplayer.

18. Be A Hero (40G) – Super Hero on every level. — Remember that you need to earn “Super Villain” on every level for the Villains as well to unlock this Achievement.

22. The Richest Man In Gotham (40G) – Max out the stud counter. — Simply turn on all Stud Multiplayers if you’ve unlocked them and you can easily earn this Achievement.

23. The Most Dangerous Man On Earth (20G) – Defeat Joker, Two-Face, Riddler and Catwoman as Batman.

24. Heads I Win, Tails You lose (20G) – Defeat 10 goons and 10 police officers with Two-Face in a level. — If you play through the game more than one time you should get this Achievement pretty easily.

32. Start of Something Wonderful (15G) – Shock the Joker with the Joker.

37. Natural Habitat (10G) – Smash all street lights in Episode 1 Chapter 1. — You can earn this “Natural Habitat” Achievement by destroying all of the Lightposts in Episode 1, Chapter 1. If the Achievement doesn’t pop up, try resetting and going back to the Dashboard and give it another shot. If it still doesn’t come up, try only using Batarangs to destroy objects and enemies and be sure that no bodies are knocked into the Street Lights. Also be sure that all of the Extras are turned off. If it doesn’t work in Single Player try again in Multiplayer. If you still don’t get it, reset the Xbox 360 and try again later. Keep at it and you should eventually earn the Achievement.

40. There And Back (10G) – Destroy 10 objects in one Batarang throw. — Make sure you buy more Batarangs so you can get more targets, that’ll allow you to easily earn this “There And Back” Achievement.

42. Ice To See You (15G) – Freeze 50 enemies as Mr. Freeze. — To get this “Ice To See You” Achievement try attempting it in Story Mode and freeze the Police instead of killing them.

45. Down the Rabbit Hole (20G) – Use Mad Hatter’s mind control to walk 5 enemies to their deaths.

46. Eat Floor… High Fiber (15G) – Slam 20 goons into the floor with Batman. — To easily get this Achievement, always use the B Button to pick up and enemy and press the B Button again to slam them into the ground when destroying enemies as Batman. Doing so should earn you the “Eat Floor . . . High Fiber” Achievement once you’ve done the above to 20 enemies.