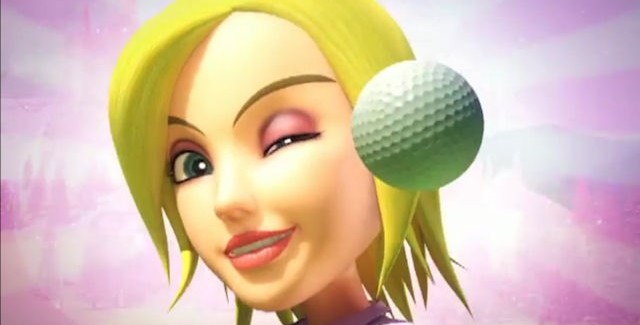 • Let’s Golf! 3D (Gameloft, $5.99)
Description: Discover Let’s Golf 3D, the most fun & colorful golf game on the Nintendo 3DS system! Play with 8 customizable characters with super powers on 108 holes in 6 locations like the Mayan jungle or a winter wonderland. The 3D Screen will let you see the trajectory of your ball like never before. – This is the first 3DSWare game. The 3D visuals will let you view your ball’s trajectory like never before. (For Nintendo 3DS)

• GO Series: Portable Shrine Wars (Gamebridge, 200 DSi Points/$1.99)
Description: GO Series presents Portable Shrine Wars from Tom Create, makers of Defense Wars. Ever seen a summer festival in Japan where dozens of people carry a huge portable shrine on their shoulders called a “Mikoshi”? In “Portable Shrine Wars” teams of Mikoshi carriers go head to head in a fast and frantic competition. Barge opponent mikoshi’s into the crowd or fling team members at them to send them crashing to the ground. As you run past grab any men that have fallen from their mikoshi to recruit them. The more men you have the faster you can run carrying the mikoshi and the more human-ammunition you’ll have. You’ll need to battle giant festival bosses and mikoshi ninjas while avoiding pit holes and other obstacles. Portable Shrine Wars is a fast and crazy game and there is almost certainly nothing else like it. (For Nintendo 3DS / Nintendo DSi)

• My Australian Farm (BiP Media, 200 DSi Points/$1.99)
Description: My Australian Farm is a breeding simulation game! At the beginning, all you own is an empty field, a little money and a single emu… You need to feed the emu, take care of it and improve its lifestyle. Well-fed with seed, it will lay eggs which can then be sold to the Shopkeeper. With this money, you can buy new animals at the Farmers’ Market. Little by little as your farm builds up, you will unlock certain bonuses: a grain store, a wind turbine, a sacred stone, etc. And you will be able to exchange your animals with your friends who play My Farm, My Exotic Farm, My Asian Farm or My Australian Farm! (For Nintendo 3DS / Nintendo DSi)

• Oscar’s World Tour (Virtual Playground, 500 DSi Points/$1.99)
Description: Oscar is back, with more great zany non-stop action, set over 7 new exciting Worlds, America, The Oceans, Africa, The Islands, Europe, Arctic & Antarctic and The Far East. Your mission is to swim, fly and run through these Worlds collecting baby Oscars that have become scattered through out the levels, armed with your secret weapon, a yo-yo that you can use to swing from platform to platform and zap those nasty enemies. (For Nintendo 3DS / Nintendo DSi)

• Burn the Rope (Big Blue Bubble, 1,000 Wii Points)
Description: Burn your way through levels in this completely unique puzzler. Burn the Rope is a challenging game where you try to burn as much of the rope as you can in each level. The catch is the fire only burns upwards, leaving you to turn the level to keep your flame alive! As you progress through the levels, you’ll encounter bugs crawling along the rope which all have different reactions to the flame. (For Wii)

• Brawl Brothers (Jaleco, SNES, 800 Wii Points)
Description: A classic 2-player scrolling beat ‘em up is back on the Virtual Console service! People are going missing in Bayside City and the rumors say someone conducting a shady human cloning experiment is responsible. For Rick (a.k.a. Hack) and Doug (a.k.a. Slash) this situation has become personal. Especially after three friends from their martial arts gym get abducted. The duo set off to the enemy’s secret air fortress to sort this out. These guys know all the moves, from martial arts to pro wrestling throws, and they don’t hesitate to use them. They’re not afraid of using knives, bats, and other things they find to get the job done. And if that wasn’t enough, when they get hurt they get angry—and you really don’t want to mess with them then. They ignore damage and hit even harder than usual! They’re ready for the action. The question is: are you? (For Wii)