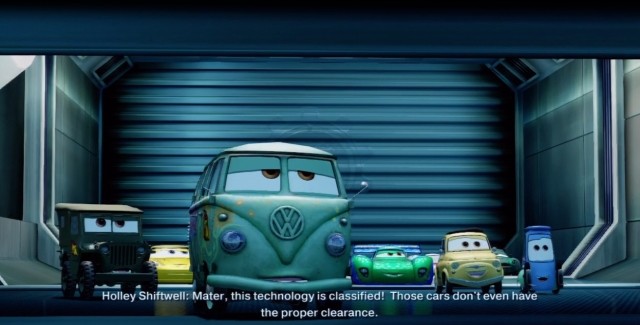 Hi there guys and girls it’s review time and today it is “Cars 2: The Video Game”, so can Lightning still keep up with the best or is he looking set for the scrap pile? Lets find out.

Cars 2: The Video Game is a third-person racing game developed by Avalanche Software. It is based on the critically unclaimed 2011 film Cars 2, the sequel to the 2006 film Cars. Originally announced at E3 in 2011, the game was released by Disney Interactive on major platforms in North America on June 21, 2011, and in Australia 2 days later. The game was released in Europe on July 22, 2011

Now that’s a simple run down of the game but you guys want the real video review so that’s below.

Well lets start of with WOW that should set the tone nicely, now lets discuss Cars 2 and it’s looks in general things like backgrounds and smaller details are all present and accounted for along with stunning looking levels and yes it may look Pixar but London still feels like London, the characters themselves are all lovingly recreated and you could be forgiven for thinking this was almost part of the movie sometimes a visual treat for all ages.

So this is where your average movie tie in falls flat on it face with tired unimagined gameplay but not I repeat NOT with Cars 2 the gameplay is smooth polished and actually works all the time, maybe I sound dumbstruck but having lived through many a tortured play session for reviews I was kinda expecting more of the same the usual movie tat and that would be it, instead I found myself immersed in a game losing all concept of time all I wanted to do was race and that my good friends is the hallmark of gaming quality the guys at Avalanche and Disney deserve some serious credit for the game on the whole.

If you have ever read one of my reviews you’ll know I don’t really rate or slate games on there sound unless it makes me want to scratch my ears out really, Cars 2 does a good job though of keeping the mood upbeat and racey with some really cool tracks and some funny one liners from friends and enemies alike as you race.

OK so was I surprised by Cars 2? Hell Yeah, I know that was slightly dramatic, but lets face facts movie games are rubbish that was until Cars 2 came along and the people at Disney showed games don’t have to be bad simply because they had the same time constraint as the Hollywood title. I really hope this is the beginning of a new trend where developers and publishers will actually bring content worthy of the title to the gamers who deserve it. The race mechanic is by no means a new game, but it is done with style and attention to detail making it an absolute must for all ages! This is what movie gaming should be like.