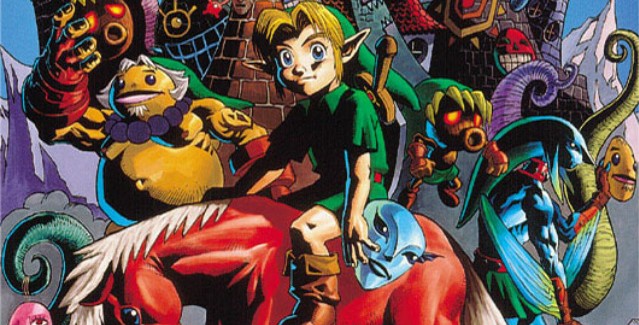 Do you want Majora’s Mask 3D for Nintendo 3DS? OF COURSE YOU DO!

Even more so if fans demand it!

“It’s been 13 years since The Legend of Zelda: Ocarina of Time was originally released, and one of the big things that made this remake possible was that there was an outpour of emotions from people who said they would like to see this game done. We said we could do it in 3D, so we did. I think certainly if there was a similar output of emotion and clamor from fans for a remake of Majora’s Mask, it wouldn’t be an utter impossibility.”

This walkthrough video shows the first part of Majora’s Mask.

Majora’s Mask was very unique, as it employed a unique system seemingly inspired by the 1993 movie Groundhog Day (with Bill Murray). Like the film, in Majora’s Mask the same three days repeat over and over again, with the end only coming if players can satisfy all the requirements of the major questline. The game also had a comedic bent (though was eerie as well) and tons of other quests were also available to conquer.

The game was HUGE and very complex, with over 24-total masks to collect, some of which could be VERY tough to earn. Much of the game had Link following certain characters and talking to them at specific times of day, as the game had a running virtual clock, with events happening at specific times or only once certain objectives were met.

The game also had typical Zelda dungeons to traverse, along with new abilities that were employed by wearing the Masks, including the ability for Link to transform completely into three difference races of creatures (Goron Link, Zora Link, Deku Link) each with their own abilities. New songs to play on your Ocarina were also unlockable, including the ability to warp to any location.

Majora’s Mask was very unique, with fun and extremely weird characters (including a cataclysmic, evil Moon with a face, which destroys the world at the end of the 3 Days by crashing into it, and grows closer and closer through each day) and introduced Zelda fans to such enduring personalities as Tingle and Skull Kid. The Happy Mask Salesman from Ocarina of Time also played an important role in the game.

While some people absolutely loved Majora’s Mask, others absolutely hated it and considered it the bastard-child of Nintendo’s Zelda series, as the game used the same engine and graphics as Ocarina of Time, of which it was a spin-off/side-story.

So what would Nintendo add to a 3DS Majora’s Mask?

“Thinking on it now, having a handheld Majora’s Mask where you could kind of just set things down on your own time — close it, set it aside and come back to it later — might be a gameplay element some fans will actually take to and might really appreciate. Especially considering how you really had to rush through the original game, in a sense.” So says Aonuma.

Be sure to contact Nintendo of America and let them know you’d love to see a handheld The Legend of Zelda: Majora’s Mask 3D for 3DS!