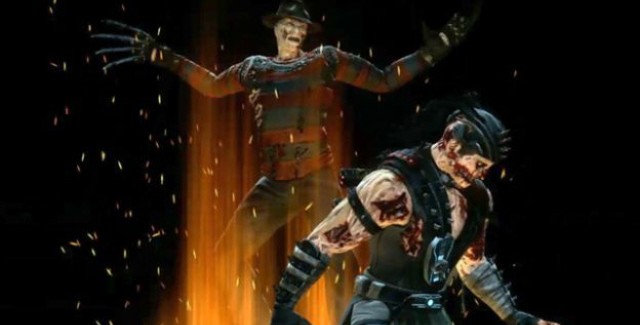 Just in time for a very early Halloween, the haunt from the Nightmare On Elm Street slasher films makes a very fitting final cap for the currently scheduled downloadable characters which were to include four all together.

Two of the previous three were not NEW, as Kenshi hailed from Mortal Kombat: Deadly Alliance and Rain kicked much ass in Ultimate Mortal Kombat 3 and Mortal Kombat Trilogy. Skarlet on the other hand was taken from a glitch in Mortal Kombat 2, although turned into a fully fleshed out (and female) character.

However Freddy Kruegar? Now THAT is a surprise! Although you couldn’t find a more fitting character to join the ranks of Mortal Kombat, given his murderous bloodlust and quench for teenage souls delivered in gory fashion. Naturally, his Fatalities and moveset will stay true to the character and he will deliver some much needed freshness to the roster.

It is important to note that Kruegar’s character model looks closer to being based on the 2010 Michael Bay-produced Nightmare On Elm Street reboot, where Jack E. Haley (Watchmen‘s Rorschach) played him, instead of the classic Wes Craven 1984 original, played by Robert Englund. Although Ed Boon himself denies this and says it is their own version, and isn’t based on any exact film version. Hopefully a pack will be released alongside his DLC that includes a classic costume.

Here is the debut trailer for Freddy Kruegar in Mortal Kombat 2011!

In an Freddy Kruegar Mortal Kombat 2011 interview with Ed Boon, Boon also revealed that they have wanted to include a horror film villain in previous Mortal Kombat games, but we never able to figure out how to do it. This time they knew they could, and set out to make the initial line-up of four DLC characters include a guest character… one from a horror film. Other nominees included Jason Voorhees (Friday the 13th), Leatherface (The Texas Chainsaw Massacre) and Michael Meyers (Halloween).

Why did they settle on Freddy?

“It’s kind of hard to choose a character who would fit well into the Mortal Kombat universe, with the blood and violence that’s so associated with it,” Ed Boon told the PlayStation Blog. “Kratos from God of War is a brutal, bloody character, so he makes sense. When we had the discussions about the DLC characters, we knew that we wanted to add a returning character, a new character, but also a guest character. That was one of the goals right from the beginning. A number of names were run by us: Jason, Michael Meyers and all those guys. Freddy Krueger, we felt, was the most instantly recognizable and he fits in with Mortal Kombat with his claws. It just seemed like the best fit.”

He also had this to say when asked about why they based Freddy off last year’s reboot: “We didn’t try to make him look like the actor Robert Englund, I don’t even know if we would be allowed to… Admittedly, I didn’t see the latest movie, the remake. But obviously the first few movies were huge — they left an undeniable mark on pop culture. When I look at him, I think of the original Freddy: he’s got the striped sweater and is instantly recognizable. He’s Freddy in general, we don’t really identify him as one version or another.”

It’s also fun to note that NetherRealm Studios, the Ed Boon development house behind Mortal Kombat, and the Mortal Kombat franchise in particular, are owned by the WB. Warner Bros. bought the Mortal Kombat rights when Midway went under. The WB also owns Freddy, so having him as a DLC character made even more sense given that fact.

What do you think about having Freddy in Mortal Kombat? I think its PERFECT. No complaints from me!