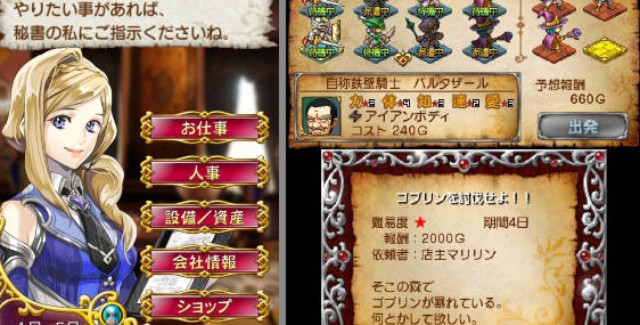 Brave Company has been announced as a new 3DS sim-like RPG from Namco Bandai Games developed by Cattle Call in Japan.

Cattle Call (what a name, eh) is the company behind Space Invaders Get Even, Metal Max 3 and the modern Arc the Lad titles).

Brave Company gives an interesting spin on the typical “group of heroes slay dragons and save the princess, plus the world” formula by tasking the player as the “company” whose business it is to SEND heroes out to save the world.

To that end, you’ll interview potential heroes or heroines, hire them, train them and then send them out! With success the world around you and how far you can send them, as well as your business, will grow.

You must maintain your roster of heroes and heroines and successfully dispatch them across the world to solve whatever problems are at hand. Each of your heroes has their own class (Knight, Wizard, Archer, Priest, etc.) and you’ll earn better equipment,items and money for each successful mission your heroes complete. There are over 10 Hero classes. The more skilled the Hero, the higher the contract fee!

Assigning the right hero for the job is key, as the funds you earn from completing successful missions are used to expand your growing business by rebuilding and adding onto your headquarters! You start out in a small hut and can eventually expand into a Sky Scraper! Funds can also be used to create new facilities in town which increase your ability to gather resources and important items.

The developers promise over 100 quests for gamers to complete. Quests range from “Search Work” (treasure hunt quests) to “Battle Work” (hunt down those monsters!).

The iOS version will differ from the 3DS version, but will contain some exclusive features like having to manage your heroes fulfilling their quests in real time! This means that Quests will take differing amounts of time to complete. Some will take “a lunch break”, others you’ll want to send out before you go to sleep! The iOS version will include two free chapters, will Chapter Three and beyond costing ¥350. Paid item downloads are also planned.

No word on whether this game will be released outside of Japan, but hopefully Namco Bandai will bring it over, as it sounds like a fun little RPG that would fill a unique hole in the 3DS library which is lacking in RPG/Sims of the moment.