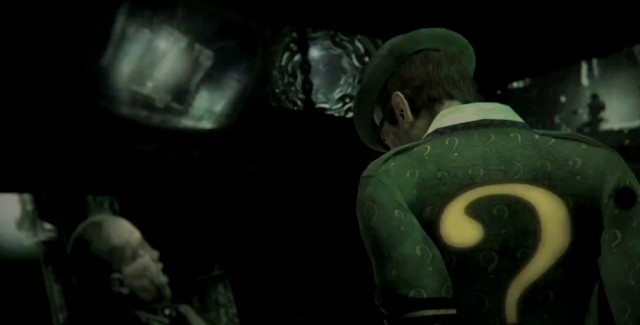 The Riddler returns in Batman: Arkham City, as revealed in a new trailer for the game that gives us our first look at Batman’s cunning foe.

Unlike in the first game, this time The Riddler will have a greater role beyond simply leaving clues for Batman to solve that give you interesting audioclip insight.

Of course, Riddler Trophies are still hidden about with puzzles to solve, and collecting them will give you experience points, but you also get a greater reward for solving the riddles. The more of them you solve, the more Riddler Challenge Rooms you will unlock. You’ll find these Riddler Challenge Rooms scattered about Gotham; full of traps and captured maidens/hostages in distress they are.

You’ll need to use Batman’s acrobatic skills to traverse some of these “dungeons”, which feature everything from rolling spikes you best avoid to electric floors, requiring you to keep airborne or above ground to survive. The Riddler Trophies themselves will also be more complex than those of the first game.

Here is the debut trailer for Riddler in Batman: Arkham City.

I can bet solving Riddler puzzles will be a heck of a lot of fun on the Wii U version, I can only imagine the possiblities!