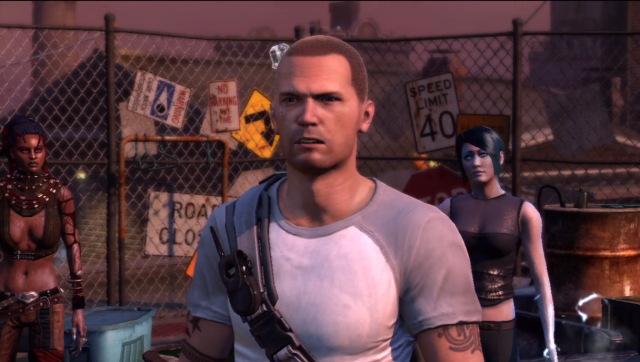 Cole returns to our PlayStations in InFamous 2, and this time he’s packing some serious punch. It’s time for more open world super hero action from a game that looks set to make itself one of the Playstation 3’s finest exclusive titles around. Now let’s zap this review shall we.

In the month following the events of InFamous, Cole MacGrath and his friend Zeke wait in Empire City and are preparing to face the Beast, a superpowered entity that Kessler had warned them about. They meet NSA agent Lucy Kuo, who knows of Dr. Wolfe, a scientist that worked on the development of the Ray Sphere — the device that gave Cole his powers but at the cost of the lives of thousands of others in Empire City — and may be able to help Cole further. As they prepare to depart to Wolfe’s home in New Marais, the Beast appears in Empire City. Cole attempts to fight him but is too weak, and he, Zeke, and Kuo escape as Empire City is destroyed by the creature. As they sail along the United States’ eastern seaboard, they learn the Beast is slowly following them, destroying cities and towns in its path.

So let’s take a look at InFamous 2 in action.

Cole and co have been through the graphical make-over machine and come out on the other side looking faster and sleeker than they did in the first game. A huge improvement has been made in all areas, although some may think the new look is a little cartoon-like, I feel it very much suits the comic book style of the game and makes for a good-looking game.

Brilliant, that’s a nice way to sum it all up, with controls that never let you down and a variety of superpowers that only ever get better, you are set to go about your super hero duty with ease. Camera angles do sometimes get in the way of your fights with enemies, but it’s nothing game-breaking. Climbing up to the top of huge skyscrapers and then slamming into the ground destroying enemies that are standing around is stomach turning on the descent and so satisfying that you’ll climb back up just to do it all again.

The soundtrack that plays throughout the game does a great job of keeping the pace and feel of the game moving along. And with voice acting that isn’t so bad that you need to ignore cutscenes. The sound in InFamous 2 plays a very important role, although maybe a little more variety could have spiced it up.

A must-own game for any PS3 owner and that’s it in a nutshell. Great open world fun with no restriction on being good or evil. InFamous 2 gives you the joy of GTA and the epic feel of a comic, all combined with some ultra cool super moves, makes for a winner in my books.