Shadows of the Damned Review 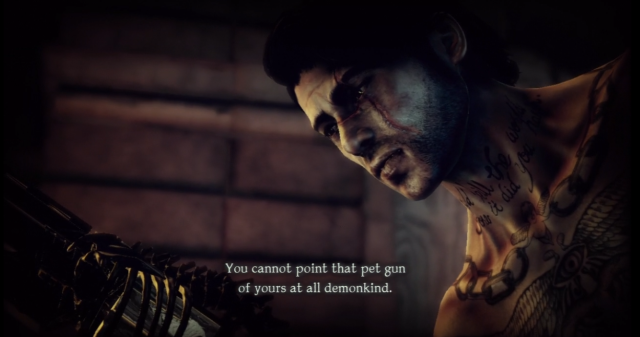 Welcome aboard the Suda51 Crazy Train guys and girls, this his latest mind warping title: Shadows of the Damned. In my review we’ll dive into this demon world of strawberry fuelled crazy and see how it measures up.

This PlayStation 3 and Xbox 360 game is the result of collaboration between Goichi Suda (No More Heroes series) and Shinji Mikami (Resident Evil series), and will combine the styles of the two designers, namely the “punk rock” edge of the former and the “psychological action thriller” of the latter.

When evil demonic creatures kidnap Garcia Hotspur’s girlfriend, it’s up to the Mexican demon hunter to travel to the City of the Damned AKA Hell to get her back. Aided by a former demon called Johnson with the ability to transform into an array of vicious weapons, Garcia will once again take on the mantel of “demon hunter” and rip apart the horrifying forces of the underworld to protect what he loves most.

Lets jump into the video review shall we?

Lets go psycho or at least that’s the feeling the look of this game has. I mean “Wow!” where to start… is it the wall climbing demons or the tiny sushi lamp? Ok odd names aside, this game is a treat to look at (like Enslaved, it’s the most colorful the Unreal Engine has looked yet) with a lovely solid graphical look that doesn’t give up, regardless of the condition being that you’re taking on one or twenty monsters at a time. The entire style suits the game well, the cutscenes are rendered out in the same diluted color tones as the game leaving you slightly on edge all the time. They may not be cutting edge but very solid none the less.

A third-person action-adventure/psycho thriller with tons of guns and a good hardy control system, similar to that of Resident Evil 5, make playing Shadows of the Damned a treat, leaving you to enjoy the cracking sound track and beasties without ever feeling let down by your joystick. Although the camera angles aren’t always perfect during fights. It makes for a great gameplay score and good fun all throughout the game.

I WANNA ROCK!! Oops! Sorry I got carried away by the mind-blowing soundtrack for Shadows of the Damned, but it truly does rock with the Damned themselves putting their musical talent to the intro and the great jams and riffs that play throughout the game. This is a musical soundfest unlike any other games and one to be enjoyed with the volume at 11.

Twisted, funny and just simplistic gaming fun all round. Another brilliant piece of gaming comes to us from the one known as Suda51, he hasn’t disappointed at all. This won’t be everyone’s cup of tea, with the adult humor and piled on sexual references, but an awesome game all round and a well deserved 8.

Index of Shadows of the Damned Guides:

Tags: Shadows of the Damned