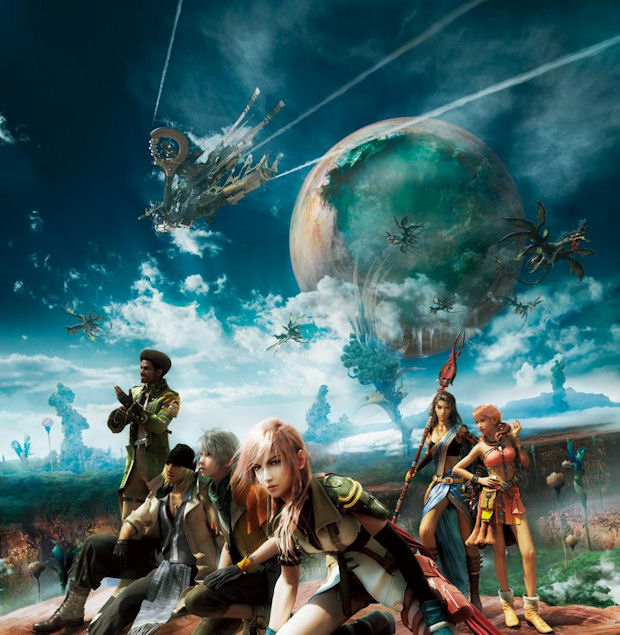 Square Enix released Final Fantasy XIII worldwide on March 9th, 2010 for PlayStation 3 and Xbox 360. Featuring an unforgettable storyline, a battle system blending action and strategy, cutting-edge visuals and awe-inspiring cinematic sequences, Final Fantasy XIII promised to deliver the next step in the evolution of gaming. But can it deliver?

“All this dampness is damp.” -Sazh

Cocoon, a human paradise, floats above the world of Pulse. When an ancient entity of Pulse origin awakens on the outskirts of a Cocoon city, paradise is threatened from within. Chosen by destiny, six must choose between saving mankind, and saving themselves.

In Final Fantasy XIII, you will embark on a journey through the cityworld of Cocoon and the outerworld of Pulse. Along the way, you will encounter diverse allies who will fight alongside you. As a deepening crisis threatens to plunge the floating world of Cocoon into chaos, a band of unsuspecting strangers find themselves branded enemies of the state. With the panicking population baying for their blood, and the military all too happy to oblige, they have no choice but to run for their lives. Join them on a desperate quest to challenge the forces controlling their fate, and prevent untold destruction.

Execute powerful attacks with weapons and magic, and summon the enigmatic Eidolons with an evolved Active Time Battle system. Experience seamless transitions between real-time gameplay and in-game cinematics. Do you have the courage to face your destiny?

Here is my review for Final Fantasy XIII!

It would be great to hear your thoughts on the game – if you think I’m totally wrong feel free to call me a doofus, if you agree what do you agree with?

Side note about the review: Masashi Hamauzu did not compose the score for Kingdom Hearts that was Yoko Shimomura 🙂 Hamauzu was employed by Square Enix back in ’96 and worked alongside Nobuo Uematsu, Ryo Yamazaki and Junya Nakano on FFX, Front Mission: Gun Hazard, Dirge of Cerberus: FFVII, and Musashi: Samurai Legend.
Yoko Shimomura did however compose the theme track for FFXIII Versus 🙂

Music from the game used in the review:

The songs featured in the background are all from the official Final Fantasy XIII soundtrack (barring track 2.) purchased from iTunes.

The game’s main features are:

The game’s main characters are:

I didn’t feel attached to any of the characters on the team, none of them were sympathetic besides Sazh, he was the only one I really liked. The story itself isn’t too complicated, but they made it complicated. It honestly felt like they were force-feeding me all this information.

The graphics were amazing. You know they’re going to be, because you can always count on Square Enix to make something that’s so beautiful you feel like you might cry. The cutscenes for Final Fantasy XIII are absolutely beautiful, you can’t fault them. The in-game graphics are getting more and more beautiful, in-game cutscenes are slowly catching up with the cinematics with each game.

My only qualm would be that in some of the levels, like Grand Pulse, the exploration & fighting arenas are large & expansive, but also kind of bland & empty. Which I think they could’ve improved on compared to the smaller & enclosed arenas, where there was lots of stuff to see & do, but that’s more of a level design qualm.

The setup of the gameplay here I like. But the fighting doesn’t feel like it gives you much variety, because you always have the same kind of enemies you’re constantly coming up against, so that it starts to feel routine. That makes it feel like you’re fighting the same fight repeatedly, and I don’t find that fun. And when you have to upgrade your characters & weapons with points you earn from these fights, you want these fights to be different & fun enough so that you don’t feel like it’s a chore to go back and boost your points up. What is different in this game is that you can use the Paradigms, which you can shift between using the L1 or LB button.

The soundtrack is my favorite part of the game, it’s absolutely brilliant, I loved it. Unfortunately they didn’t have the composer who did the chores from the other Final Fantasy games wasn’t on-board with this one. But the new composer did a great job, so can’t fault them.

Overall, I was expecting to love Final Fantasy XIII — I’m sure like many other people — and it lacked. While I do love the Final Fantasy franchise, I felt a little disappointed. Normally each project the Final Fantasy-Square Enix team do, they push the envelope, and they try to do something new or something different and always try to raise the bar. But this one felt too samey, and that was disappointing, because I had my hopes set high for it and maybe that’s the problem that me and other fans over-hyped it in our minds. Personally I liked the game, it was alright to play, but it didn’t have that “WOW!” factor.

In closing, I’d score the game a 7.5 (that reads as an 8 for big fans). I know that seems really harsh, but on the flip-side of that it’s just a little lackluster. Not a thumbs up from me, but not a thumbs down either.

Please leave your thoughts below. Thank you for watching, I always love to hear what you guys have to say!