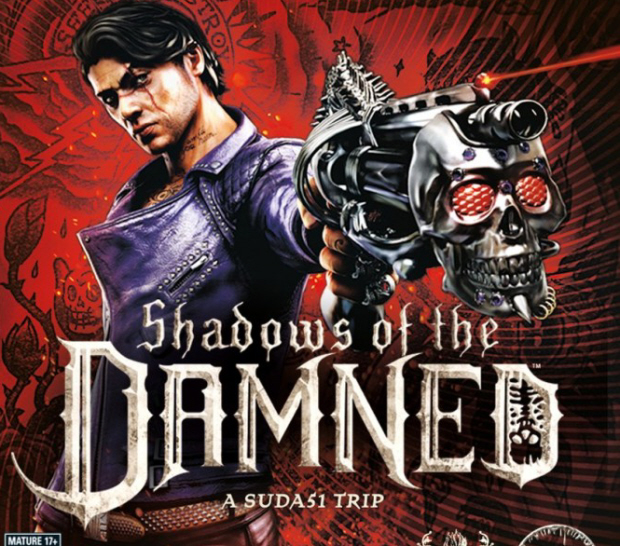 Our Shadows of the Damned walkthrough will guide you through the beginning to ending moments of cutscenes and gameplay for this action adventure horror game from Shinji Mikami and Suda51 for the Xbox 360 and PS3.

With Shadows of the Damned, creative geniuses Suda 51 (No More Heroes) and Shinji Mikami (Resident Evil) present an all-new vision of hell unlike anything seen before! A psychological action thriller, Shadows of the Damned follows a demon hunter deep into a hyper-twisted re-imagining of hell where he must rescue the love of his life by defeating the armies of darkness with the power of the light.

Garcia is a hard-as-nails, leather-clad, motorcycle-riding professional demon hunter who finds his true love kidnapped by vengeance-seeking demons. As he explores the farthest reaches of the netherworld, Garcia battles through hell and back, with danger and turmoil around every corner. Throughout Shadows of the Damned gamers will find themselves challenged by demented puzzles and thrust into gruesome battles with vile and deformed creatures that can only come from the darkest recesses of hell.

Please note that viewers must be at least 18 to watch, so no harm comes to those with innocent eyes.

Index of Shadows of the Damned Guides:

Shadows of the Damned Walkthrough

His name is Garcia Hotspur, hunter of demons, and his wrath will bring hell to its knees. From the creative genius of Suda 51 (No More Heroes) and Shinji Mikami (Resident Evil) comes an all-new psychologically twisted vision of hell unlike anything seen before. Shadows of the Damned combines visceral grindhouse-style action with dark, grotesque horror to create a mind-shattering adventure that has to been seen to be believed.

When evil demonic creatures kidnap Garcia’s girlfriend, it’s up to him to travel to the City of the Damned to get her back. Aided by a former demon with the ability to transform into an array of vicious weapons, Garcia will once again take on the mantel of “demon hunter” and rip apart the horrifying forces of the underworld to protect what he loves most. Players must harness the power of the light to fight the army of the dark in unique light versus darkness gameplay that will forever change the way gamers perceive puzzles, combat, and terror.

Combining the punk rock style of Suda 51 with the legendary horror design of Shinji Mikami, Shadows of the Damned will take gamers on an in-your-face thrill ride through demon-torn towns, shadow infested forests, grimy sewers and more. Featuring the most twisted boss battles ever seen, warped visuals and intense visceral combat, Shadows of the Damned will challenge gamers to break through the ultimate head-trip to help Garcia rescue his tortured girlfriend from the clutches of a mysterious enemy. Brace yourself for one hell of a trip to the city of the damned.

When you get right down to it, in Shadows of the Damned players will fight for love in the most diffult arena imaginable… Hell. Players will find themselves surrounded by demons set on destroying their heart and soul. Only the strong will survive. — Throughout Shadows of the Damned, players will find themselves challenged by demented puzzles and thrust into gruesome battles with vile and deformed creatures that can only come from the darkest recesses of Hell. The game features a grotesque, highly stylized art direction that transports players into a grisly world delivering an unparalleled level of fear. The entire experience is enveloped with a pulse-pounding musical score by composer Akira Yamaoka, which takes the nightmarish action horror sequences and intense boss battles that both Suda 51 and Mikami are renowned for creating to new heights.

Hey Everyone! Welcome to Shadows of the Damned! Let’s begin with an introduction to the story and gameplay.

Tags: Shadows of the Damned