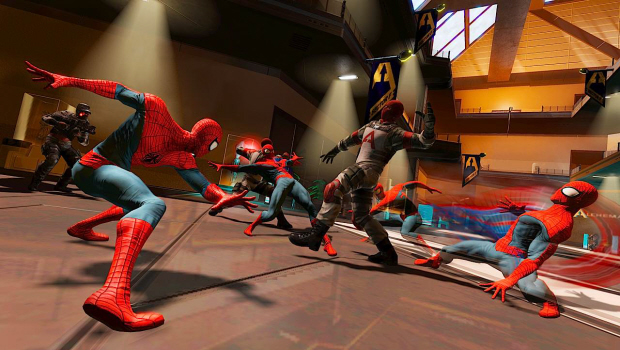 Spider-Man: Edge of Time is the highly anticipated follow-up to one of the most successful Spider-Man games since the the 2000 PS1/N64-era Spider-Man title. I am talking, of course, about Spider-Man: Shattered Dimensions.

Edge of Time is the follow-up to that game, and is a sequel in many ways although it will have nothing to do with that previous game. what it does do is lift the Amazing (essentially) and Spider-Man 2099 portions and expands and builds on them in new and interesting ways, while sticking to a unique storyline in which the Spider-Man of the future must save the Peter Parker of the past!

Topping it off, the co-creator of Spider-Man 2099 wrote the script for this game, which also features new villains, powers and characters.

This Spider-Man: Edge of Time E3 2011 trailer asks… What happens when Spider-Man dies?

You can see much more information on how the game will actually play and what it will entail in this stage demo from the E3 2011 show.