The Legend of Zelda: Ocarina of Time 3D release date of June 19th is nearly upon us, and Nintendo has turned to an interesting person to help them advertize this much anticipated Ocarina of Time remake.

Way back in 1989, Robin was a huge fan of the original 1986 The Legend of Zelda 1 title. So much so, that he named his daughter “Zelda Rae Williams” directly after Princess Zelda from the beloved classic for the Nintendo Entertainment System.

Here is what both father and daughter had to say about their love for the Zelda games and what his daughter thinks about being named after a videogame character!

Robin Williams is known for being amongst the biggest fans of The Legend of Zelda series of games. The award-winning Hollywood actor revealed that he and his family have been completely immersed in the The Legend of Zelda series since first playing them over 20 years ago. His love for the series inspired him to name his daughter Zelda after the Princess featured within the series.

From the moment Williams first played The Legend of Zelda on his Nintendo Entertainment System with his wife and son, Zachary, back in 1987, they immediately became huge fans. “Hours on hours would go by and we’d become completely immersed in the epic adventure,” Williams explains. “My favourite part was solving the puzzles. I loved exploring every room to find secret passages and hidden objects. I vividly remember the sound the doors would make when they opened.”

His love of the series would carry over to the rest of his family too, especially his daughter, Zelda Williams, who Robin famously named after the character of Princess Zelda from the series. “It seemed only natural. When my wife was pregnant, my son Zachary mentioned that Zelda would be the perfect name for his new little sister”. Robin and his wife thought, “Zelda… What a great name … it’s magical, like she is!” On July 31st 1989, Zelda Rae Williams was born.

It seems that Zelda Williams has also inherited her father’s love for The Legend of Zelda series. “I finished nearly all the Zelda games…my best memory of The Legend of Zelda: Ocarina of Time was definitely playing with the bow and arrow. I was an archer at the time and still love archery so it was really fun to use it in the fantasy world. That and Epona… I also rode horses at the time, and I loved the idea of calling a horse with a musical instrument.” 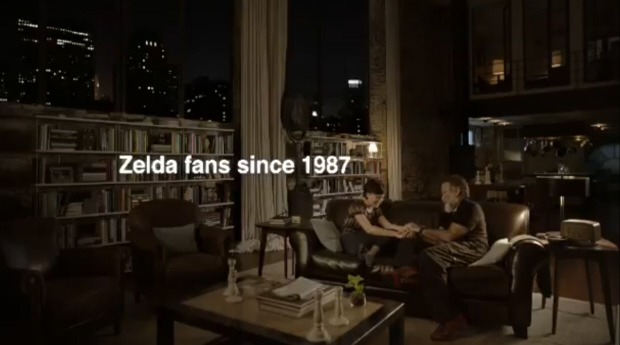 Robin and Zelda find it amusing that her unusual name often causes confusion amongst people – “A lot of people think she’s named after F. Scott Fitzgerald’s wife, but no, it’s Zelda from The Legend of Zelda!” says Robin. Zelda herself comments, “A lot of people tell me that it is the coolest name ever, I love the fact that I am named after a princess.”

Given that, this commercial is a really interesting, unique and fun way to advertise the re-release of what many consider to be the greatest Zelda game ever made, and one of the best videogames ever released.

Here is the European commercial for The Legend of Zelda: Ocarina of Time 3D for 3DS starring Robin and Zelda Williams.

Did you know that Robin Williams named his daughter Zelda? Would you ever name a child after a videogame character?