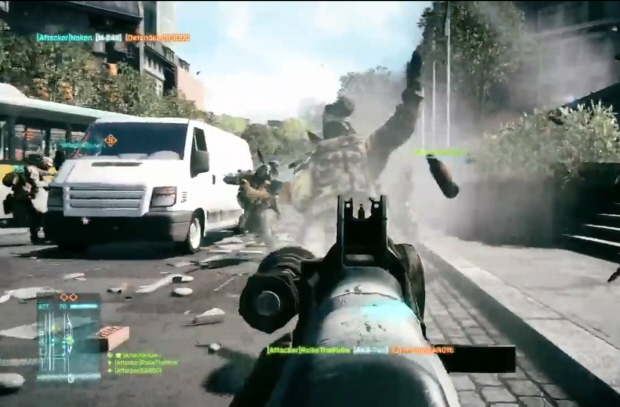 Battlefield 3 has come along and BLOWN THE ROOF OFF the E3 2011 show with a big spotlight at EA’s press conference. The Battlefield 3 release date was also confirmed as October 25th, 2011 on PC, Xbox 360 & PS3.

As with all previous showings of the game, this epic monster looks like it will offer the most realistic, visceral first-person shooting combat yet seen by any game, for any platform. Ever.

Along with the kick ass footage which you can watch below, EA announced a “Battle Log” feature which seems similar to the social networking features Activision recently revealed with their Call of Duty Elite service for Modern Warfare 3.

As you’d expect, the Battle Log keeps track of all your stats and those of other players, and allows you to create a profile, connect with friends and foes, look up your opponents statistics in real-time, create “platoons” and much more! All of this will be “100% free”, stressed EA. Taking a swipe at the Call of Duty Elite service and Activisions focus on paid “premium” content. Although its worth noting that most of the features on offer here are also free with Call of Duty Elite.

EA then announced that a multiplatform Battlefield 3 open beta will take place on September 11, 2011, allowing people to try out the game’s multiplayer modes ahead of the October 25th release date for the title.

Here is the Frostbite trailer from the E3 2011 EA Press Conference.

And here is the “Operation Metro” multiplayer trailer.