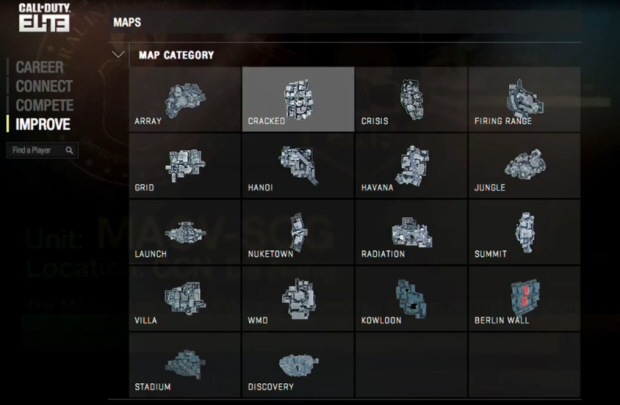 Call of Duty Elite has been announced as a paid “premium” service with both free and subscription tiers that will launch on November 8th 2011 alongside Call of Duty: Modern Warfare 3.

A beta will also begun within Call of Duty: Black Ops beforehand.

I’ll let Activision do the explaining:

Elite will offer two-way communication between the service and the game, so that the choices and decisions that players make in Elite through the mobile and web interfaces will affect their in-game experience.

Connect: Call of Duty Elite gives players unprecedented control over their multiplayer experience, transforming it into a true social network. Players can compete against friends, players of similar skill levels and players with similar interests, join groups, join clans, and play in organised tournaments. They can also track the performance, progress and activity of their entire network, both in the game itself, as well as through mobile and web interfaces. Elite will be an “always on” way for players to connect with the Call of Duty community.

Compete: Call of Duty Elite establishes the most exciting, competitive environment in a multiplayer game. Players will have available a constant stream of events and competitions, tiered to group them with those with similar abilities . Both in-game and real-world prizes will be rewarded to all skill levels.

Improve: Call of Duty Elite is like having a personal online coach. It provides players with a dynamic strategy guide that tracks their statistics and performances down to the most minute details. It can show gamers how they stack up against their friends or others in the community. Tools and information are provided so players can learn and up their game.

Carrying forward to future Call of Duty games, Elite will chronicle a player’s gameplay history in a cohesive career record, keeping track of every kill, every game and progress.

Developed from the ground up by Activision’s new Beachhead studio, Call of Duty Elite offers cutting-edge features that significantly enhance the franchises’ multiplayer experience and deliver a new level of social engagement that will unite more than 30 million players worldwide.

“The average Call of Duty player spends 58 minutes per day playing multiplayer. That is more than the average Facebook user spends per day on Facebook. And yet, right now, there are very few tools to unite and super charge that social community,” said Eric Hirshberg, CEO of Activision Publishing.

“Whether it’s allowing you to connect with your friends, or people of a similar skill level, people who live in your city, people who share your favourite passions, join competitive clans or social groups, or upload, view and comment on the incredible mass of player-generated content, or watch and comment on exclusive created content, Call of Duty Elite will give people more ways to connect with fellow players than ever before. Elite will also allow players of every level to improve their game with an intuitive suite of tools, and compete in tournaments for both real and virtual prizes.”

The service will be accessible on a number of platforms – via web browsers, mobile devices, through game consoles and within the game interface itself – so that players can connect with Call of Duty Elite whenever and wherever they want.

Who saw THIS coming? 😛 But with the revealed features, are you excited about what it entails or not?