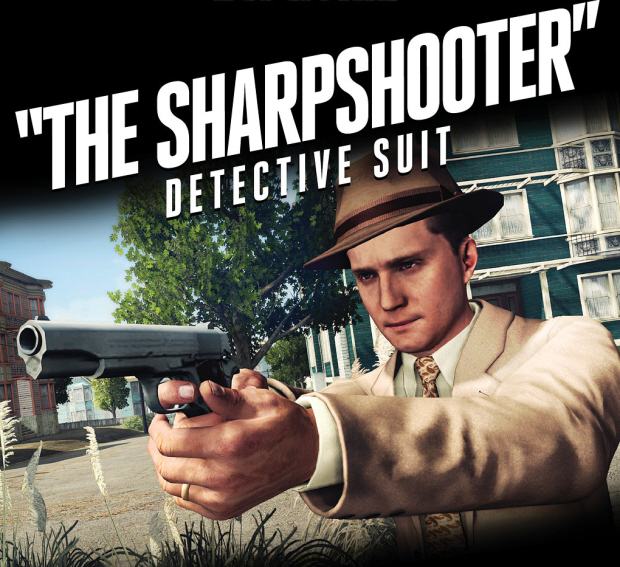 10 hidden LA Noire Outfits are available to unlock and our suits locations guide will show you where to find all the costumes and how to unlock them in this fantastic Xbox 360 and PS3 game.

Depending on the suit that you wear in L.A. Noire, Cole Phelps will get special abilities or stat boosts, such as greater accuracy with firearms are increased offensive capabilities. Suits can be purchased or are available via pre-order bonuses. Additional costumes will likely be available later on as DLC.

1. How to Unlock the Beat Cop Uniform
This Suit is unlockable for Cole Phelps once he starts working for the LAPD as a Beat Cop.

2. How to Unlock the Golden Boy
This Suit gets unlocked once Cole Phelps reaches the Traffic Desk.
Description: Get yourself two suits and get them pressed.

3. How to Unlock the Sword of Justice Outfit
This Suit is unlocked when Cole Phelps reaches Rank 3.
Description: The City of Angels is much more dangerous by night.

5. How to Unlock The Outsider Outfit
This Suit is unlocked when Cole Phelps reaches Rank 13.
Description: Don’t believe everything you read in the papers.

6. How to Unlock the Hawkshaw Outfit
This Suit is unlocked when Cole Phelps reaches Rank 18.
What it does: The Hawkshaw allows the player to endure more damage during fights and shootouts. Take an extra dose of damage and stay standing.

7. How to Unlock the The Sharpshooter
This Suit is a pre-order bonus with Best Buy (in the US and Canada), Zavvi (UK), Game (Australia), Mighty Ape (New Zealand), Ultima (France) or Bart Smit (The Netherlands) and may become purchasable as DLC for others down the road. Pre-Orders of this suit also come with the Nickel Plated Pistol alternative pistol model.
What it does: Wearing the Sharpshooter Suit increases your accuracy with certain Pistols and Rifles. Provides that extra aiming precision to take the criminal down. Obviously this will tremendously help Cole during firefights, giving you the extra precision you need to take down criminals. To be exact, you shoot straighter with the Garand and the Colt .45.

8. How to Unlock The Broderick
Pre-order with Amazon to get this Detective Suit.
What it does: This unlockable Detective Suit boosts not only the power of your fists but also your resilience to damage. This will help you to easily take out those suspects or people who try to engage you in a fist-fight, in which case this secret suit will definitely give you an edge. Hit harder and take more punches before going down.

9. How to Unlock the Button Man
This costume can be unlocked by successfully beating the Badge Pursuit Challenge and gives Cole extra ammo. — Alternatively it was available as a pre-order bonus in the USA, Canada and Australia through GameStop and EB Games and through GAME in the UK. The Pre-Order bonus also comes with the additional “The Naked City Case” downloadable content.
What it does: Carry extra ammo for all weapons, just in case.

10. How to Unlock the Chicago Lightning Suit
Only available through the Rockstar Social Club. To access this outfit in-game, you must have made Detective rank. — This unlockable Chicago Lightning Suit outfit is not only stylish, but it is also exclusively available to members of the Rockstar Social Club and probably will not be available for non-members until much later.
What it does: Wearing this suit enhances the accuracy of both Shotguns and Machine Guns. You shooter straighter with the Tompson, BAR and shotgun.

Here’s a video by 007 showing how dandy all 9 of the unlockable suits look: