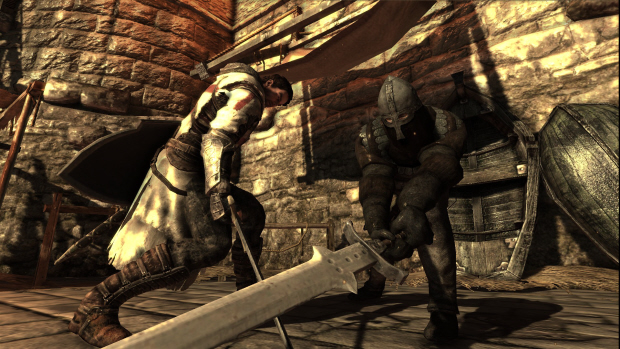 In the game you can activate the powers of Hell, which make you “quicker, stronger and more capable”, in order to see “beyond mortal men”, revealing lost souls. Your goal is to purify them, however the curse and powers that come with it will also drain your health when activated.

Plot
The end of 12th century is nearing. The Pope Innocent 3rd launches a new crusade in order to conquest the holy city, given up few years earlier to the Sultan Solomon armies. While the High Franc Barons mobilize for this new great epic, the meeting with Prince Alexis, Byzantine Empire throne descendant, will change the course of history: This crusade will never go further than Constantinople…

“The Templars have borne the curse through the generations, passing it down to their sons. Those who activate the curse are the only ones who see the world turn to Hell. Activating the Templar’s Curse puts the power of Hell at the player’s disposal. Increasing agility and power, as well as granting new abilities beyond mortal men, it is a power to be reckoned with. But at the cost of the character’s life, and with Death lurking in the shadows… The player must use it wisely. While in the curse, the souls of the damned and lost become visible. Purifying them and sending them to their final rest may yield benefits to those would seek redemption for their deeds.”

Here is a story trailer.

In Co-Op Mode, players have the option to recruit a friend to join the crusade and play as the thief, Esteban, so they can battle it out together in local split-screen or online.

Players can count on each other to perform cooperative holds, finishing moves, and even to bring each other back from the brink of death. The split-screen mode is available in both horizontal and vertical splits, allowing crusading duos to customize their co-op experience to their liking.

Here is a trailer for The Cursed Crusade showing off the Co-Op.