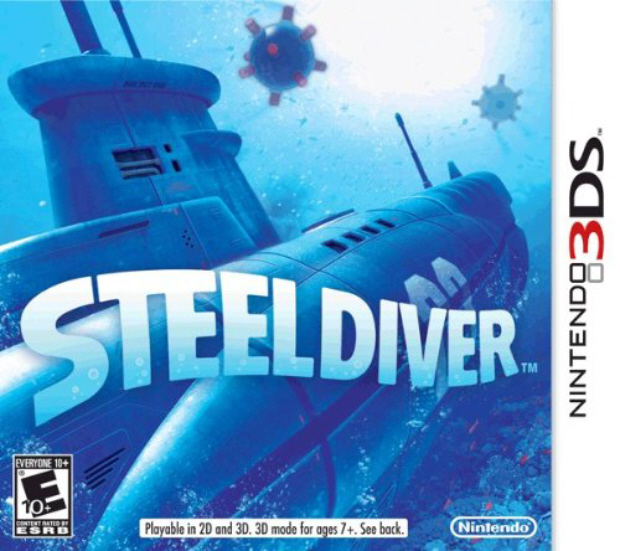 Steel Diver is an interesting beast. One of three launch-period games for the Nintendo 3DS, Steel Diver is by far the most “different” of the launch-period titles that Nintendo put out for its newest glasses-free stereoscopic 3D portable; the other two being the pet-simulation Nintendogs + Cats and Pilotwings Resort.

It is from that perspective that Steel Diver starts to lose some of its luster. But first lets look at what exactly Steel Diver is and how it the game works.

Steel Diver is essentially a side-scrolling “submarine” simulation-action game. Although it is much more “action” than it is “sim”, although that action isn’t really the correct word to describe the game. Neither is the word “shooter”. Steel Diver is none of those, its more like a game in which you occasionally shoot at things, while navigating different size subs through underwater tracks or “mazes”, trying to reach the end.

Here is the story summary, although the game really has no story to speak of, as it only plays a part in the the level descriptions. 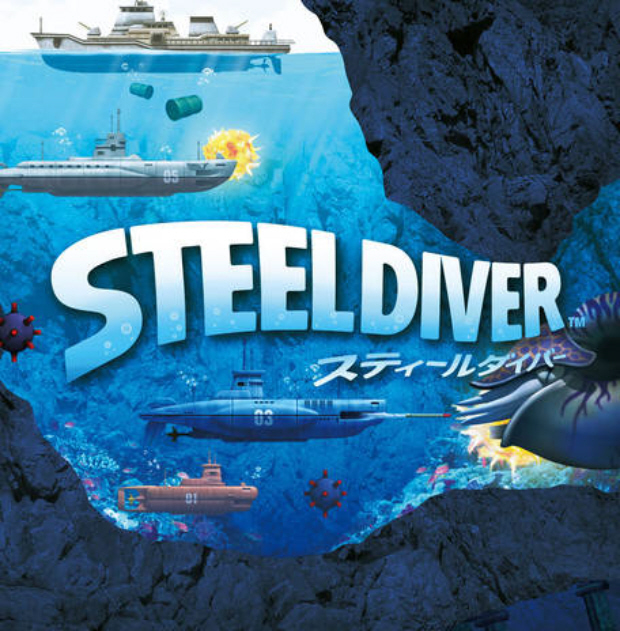 System: 3DS
Also Available On: None
Released: USA March 27, 2011 – EUR May 6, 2011 – AUS TBA – JPN TBA
Players: Mostly single-player. 2-Player local for “Steel Commander” strategy mode.
Supports: Download-Play (Two 3DS systems, only 1 game copy needed). Accelerometer/Gryoscope supported for looking around with Periscope (you can physically rotate your body to look around). No online support, camera, mic, StreetPass or SpotPass support. The game is entirely controlled using the Touch Screen, and supports glasses-free stereoscopic 3D graphical effects of course.
Genre: Side-Scrolling action Submarine game. With a dose of tactics and “sim” thrown in. Also includes a strategy boardgame-style multiplayer mode called Steel Commander.
Save: No save slots, only 1 “profile”. High scores are saved after each Mission or level you play (in all modes), and you can enter your initials.
Online Support? No. The game should’ve supported online leaderboards for comparing high-scores with the world or at the very least with your friends who are online. StreetPass should’ve been supported as well, but isn’t.
Developer: Nintendo EAD and Vitei
Publisher: Nintendo
Country of Origin: Japan
Rating: E10+ for Everyone Ten and Older because of “Mild Violence”. (This rating is nonsense, there is no violence whatsoever in this game).

“The year is 19XX. A power hungry rogue nation has invaded its neighboring countries, placing the stability of the entire world in danger. In or oder to preserve peace a secret submarine fleet, chosen from the best and brightest of the world’s navies, has been formed. They are known as the Steel Divers.

Message to new recruits: Welcome to the Steel Divers. Our fleet of attack submarines is stationed on the front lines to spearhead the attack against our enemy and defend our allies. As a Steel Diver, it’s no exaggeration to say that the fate of the world lies in your hands. Make us proud – Board of Directors, Steel Divers.

The “Sim” aspect of the game comes from how you control your sub. This isn’t a game where you use the D-Pad or the 3DS’ new Circle Pad analog stick to directly control you sub, instead you use two levers and buttons, all located on the top-screen, to navigate the sub on the 3DS’ top-screen.

Here is how the controls breakdown:

From the outset there are three unique Subs for you to choose from, each of progressively larger size and with completely different abilities.

The Selectable Playable Subs are:

Manatee Compact Sub (Captain Luc Fisher) – “A highly maneuverable Sub that can fire missiles vertically”. This Sub is the smallest, slowest and weakest. But the small size also has its advantages and makes it easier to navigate through a course. One major drawback is the fact that this Sub can only fire ONE front missile at a time. However making up for that lack of firepower is the fact that this Sub is the only Sub that can fire a vertical Torpedo that shoots straight up from the top. Making this Sub ideal for taking out enemies or objects that attack from above. However another major drawback of this Sub is that it lacks a wheel for controlling pitch, the direction the Sub points, which is done automatically. The low amount of crewmembers on this Sub also mean it heals the slowest.

BlueShark Midsize Sub (Captain Ben Triton) – “A balanced, all around Sub”. This is the “average” Sub which isn’t as strong or fast as the Goliath Serpent Sub, but not as tiny and weak as the Manatee. This Sub features a Pitch Wheel that allows you to rotate a degree up or down to point the Sub, and it can fire two straight Torpedoes. The medium sized crew means this Sub heals faster than the Manatee but slower than the Serpent.

Serpent Large Sub (Captain Dante Cruz) – “A powerful Sub with limited maneuverability.” This Sub features a Pitch Wheel that can turn 360 degrees allowing you to quickly point the Sub in any direction. It also heals the fastest and is the most powerful Sub that is less susceptible to enemy attack. However the very large size makes this Sub an easy target. And while the top speed is fast, the Sub feels slow, cumbersome and lumbering with low acceleration. The large size also makes it tough to navigate through enclosed areas and harder to avoid hitting the sides. But the big plus to using this ship is the fact that it can fire FOUR front-missiles! Huzzah!

During gameplay, you will navigate your Sub through various levels trying to reach the end before time runs out (which can make it extra hard sometimes), furiously moving the two sliders up and down or right and left to maneuver your ship in order to avoid obstacles, shoot down enemy subs, shoot apart environmental obstructions, try to beat the stage in the quickest time possible (which can include racing the developer Ghost, beat the Ghost’s time and you’ll earn a Medal) and avoid hitting the sides, top or bottom of the course. Touching a side, object or enemy attack (which can include torpedoes, mines, bombs, etc.) will all damage you. If you get hit with a strong strike, your sub will leak and you will need to furiously swipe the bottom Touch Screen at the location of the leak in order to plug it. When this happens your ship will lock up and start to sink and you’ll remain immobile until you plug the leak; naturally making you very susceptible to enemy attack or open to even further damage as you slam into the environments sides or bottom.

Here is a look at Steel Diver in action.

After each course you will play a “Periscope Strike” mini-game. Here you will be using the “scope” device that pops out of the top of the Sub and looking through its View Finder. You will get about 10 seconds to rotate and shoot ships in the distance. If you get hit then you can’t move for a bit. You can either use the stylus on the “Rotation Slider” bar at the bottom to rotate the scope around, or you can physically move yourself by pivoting in a circle (this is done best while sitting in an office chair that rotates and swirling around!). Naturally, this feature makes use of the 3DS’ built-in gyroscope and accelerometer. Also on the Periscope Strike gameplay screen, you will see two levers. The left lever, or Zoom Slider, can be pulled up or down to zoom in on a target. The right lever can be pulled to make your Sub “Dive”, this is used to avoid oncoming torpedo attacks from the enemy Subs. If a green radar or “Sonar”, appears, you can tap it to reveal the location of enemy ships relative to your position. And at the top screen in the upper corners you can see how many enemy ships are remaining and how much time you have left.

Depending on how many enemy ships you shoot down during the “Periscope Strike” mini-games, you will earn unlockable Decals as an award. There are a total of 31 Decals that you can unlock, and each of them grant you special bonuses and come in different designs. These bonuses and decals include the likes of the following: