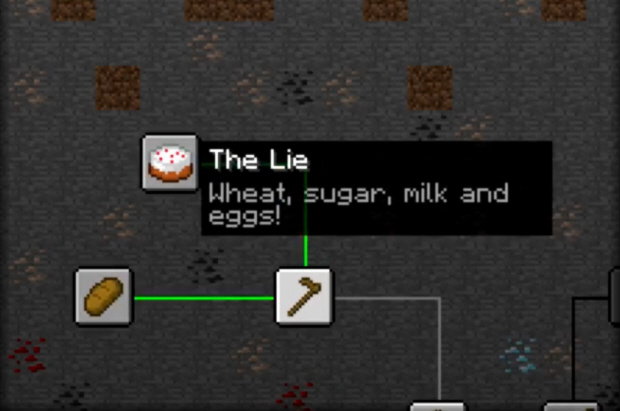 16 Achievements are obtainable in Minecraft as of Update 1.5 for the PC gaming phenomenon (added on April 19, 2011).

Achievements in Minecraft can be obtained by performing the required task in the list below, earning one doesn’t give you any points, but will fill out the Achievement Tree and unlock the following Achievements ahead of the one you just unlocked, allowing you to branch out to additional Achievements and giving you hints on how those further Achievements are obtained.

Here is what Minecraft creator Notch had to say about the Achievement system in Minecraft:

“I like achievements. I know a lot of people don’t, but I like them. I’ve had the idea to make achievements kind of like the in-game questing. So you’d be able to see the first achievement in a tree of achievements, and you unlock the top ones first before you can unlock the ones further down. So the first one might be to chop down a tree, or kill a chicken, and then these branch into more things you can do. Hopefully it would encourage people to try new areas. It could converge into a big task, like kill a dragon or something, which would put a kind of narrative into the achievement tree.” When asked if Achievements may endanger the open nature of the game and instead take players down a preset path, Notch replied, “Definitely. I’d want these achievements to feel like things you can try, rather than these are things you have to do. People can follow them, but only if they want to. Achievements will NOT be chores like ‘cut down 10000 trees’, but rather challenges like ‘ride a pig off a cliff’. Stats, however, will be used to keep track of how many trees you have cut down. The long term plan is to show achievements and stats from the profile page on minecraft.net as well, in case you want to brag.”

1. Taking Inventory – Press E or I to open your inventory.
2. Getting Wood – Punch a tree until a block of wood pops out.
3. Benchmarking – Craft a workbench with four blocks of wooden planks.
4. Time to Farm! – Use planks and sticks to make a hoe.
5. Bake Bread – Turn wheat into bread.
6. The Lie – Bake a cake using: wheat, sugar, milk and eggs.
7. Time to Strike! – Use planks and sticks to make a sword.
8. Monster Hunter – Attack and destroy a monster.
9. Cow Tipper – Harvest some leather.
10. When Pigs Fly – Use a saddle to ride a pig, then have the pig get killed from fall damage while riding it.
11. Time to Mine! – Use planks and sticks to make a pickaxe.
12. Getting an Upgrade – Construct a better pickaxe.
13. Hot Topic – Construct a furnace out of eight cobblestone blocks.
14. Delicious Fish – Catch and cook fish!
15. Acquire Hardware – Smelt an iron ingot.
16. On A Rail – Travel by minecart at least 1 km from where you started.

This video will show you how to unlock several of the above Achievements.

Many more can be obtained by watching this video to find out how.

Thanks to MrChampbaileys24 and RoosterTeeth for the videos.