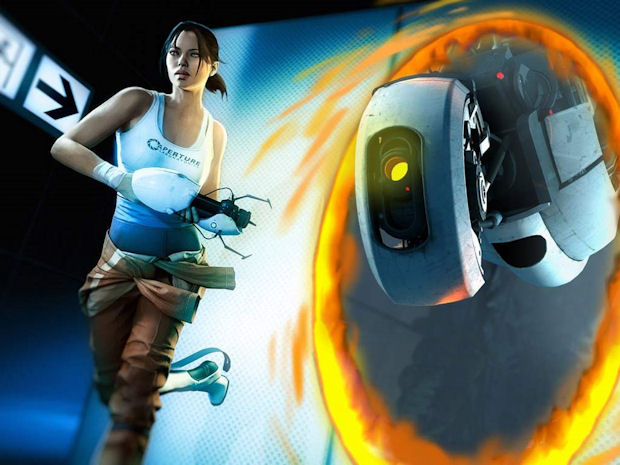 So does bending the space-time continuum make for awesome gaming? The guys at Valve certainly think so. Take a look at my spoiler-free Portal 2 review to see if holds up to the hype or collapses quicker than a wormhole.

Portal 2 is a puzzle game presented from the first-person perspective. Normally, the player, as either Chell in the single-player campaign or as one of two robots, Atlas or P-body, in the co-operative campaign, can move, look, and carry and drop objects. The goal is to maneuver the characters through a number of test chambers in the Aperture Science facility, traversing the chamber from the start to the exit. Though the player-character can take some damage for a brief period of time, they will die under sustained injury and be restarted at a recent checkpoint; however, characters are equipped with “long fall boots” that absorb the shock of landing after a large vertical drop. The player must figure out how to overcome seemingly bottomless gaps, evade pools of toxic liquid, or avoid line-of-sight or even disable robotic turrets to safely arrive at the exit.

So let’s give you all a breakdown of how it scores.

Portal 2 has shrugged off its old school look and comes back looking fresh and clean the outdoor environments render out brilliantly, although not much in the way of cinematics, all cuts scenes that are there are great to watch.

Portal 2 shares the same unique 3D FPS style puzzling as the first Portal game, except with the addition of many more puzzle elements, that include light beam platforms and aerial faith plates that allow a huge range of possibilities to open up when taking on puzzles. A brilliant solid and polished gameplay mechanic that works very well.

Let’s start with the class a voice acting shall we, Ellen McLain as GLaDOS and Stephen Merchant as Wheatley will you make you laugh out loud throughout the game. Then I could move on to describe the deeply atmospheric music added, and then I could say how brilliant all the extra sound effect are. Suffice it to say I’m trying to tell you the sound is fantastic.

It’s been a long time since I enjoyed a game with puzzles this much. The humor and amazing story — oh and don’t forget cracking graphics — make Portal 2 by all lengths a perfect breath of fresh air in the over crowded game world of let’s shoot everything that moves. Its multiplayer brings you and your friends together in the same head scratching manner as the single player that can only lead to hours more fun.

So with that being my first ever perfect score what are your thoughts on Portal 2?