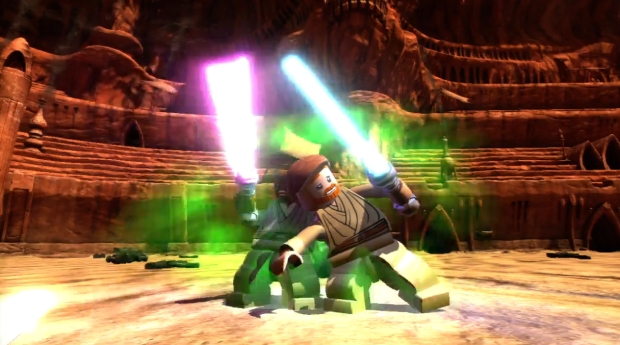 Welcome to my review of Lego Star Wars 3: The Clone Wars. After covering all the Star Wars movies, Lego has now moved us into the universe covered by the animated series, but does it stack up or will it topple like your dads last attempt at helping you build a Lego car?

This newest title takes the best elements of the previous hit Lego Star Wars games while adding some all-new gameplay elements from the RTS genre as you command troops in large-scale battles. In addition, the game includes all new battle modes for head-to-head combat, as well as an upgraded level builder. The new level builder includes customizable bases and in-game battlefields that players can craft for the split-screen multiplayer. The game also includes extensive air combat sections with the new ability to land your craft and fight on foot.

The Story Swap Mode meanwhile allows you to take control of two separate characters in separate locations and switch between them as their unique story lines run simultaneously. You can take control of either a Jedi or a Seperatist and have all-new abilities including Squad Command, Lightsaber Jumps, long-distance attacks, Grapple Tie-Ups and a more.

With much improved graphics, physics and special effects, Lego Star Wars 3 is sure to put a smile on the face of any Lego or Star Wars fan, young or old!

Well lets take a look at it all in action in my video review.

Lego Star Wars 3 shows a definite improvement over previous titles by hugely increasing the games ability to show hundreds of characters on-screen at any one time, this translates into huge epic battles and a ton of fun as you cut your way through droid after droid with your lightsabre. The on-screen effects are bright and vibrant and hold true to the games always pleasing visual.

Some may be mistaken for thinking we’ve seen this all before but Lego Star Wars 3 actually does raise the bar once again in terms of gameplay, the new battle mode see’s you in control of the battle and adds an on the fly RTS style game to an already packed title. Players are given the usual volley of levels and tons of replayability in the form of the ever famous free play mode. The fun doesn’t end though after completing the story mode that should take most around 10 hours to complete you are gifted with a huge variety of extra missions and tasks to complete.

The music in-game is worthy of any Star Wars film and never disappoints and even though there is no actual spoken dialogue from the characters during cut scenes they have used the actual voice actors from the series to bring everything together in perfect unison.

Now if cute funny and fun isn’t your thing then Lego may not be your cup of tea but like every other title Lego Star Wars 3 has delivered great fun, well thought out gameplay and a mass of action long after the final level a definite treat for any fan of either the Lego or Star Wars series.

For help with the game, check out our Lego Star Wars 3 walkthrough.

I would love to hear your thoughts on the game, so leave a comment below and lets talk Lego.