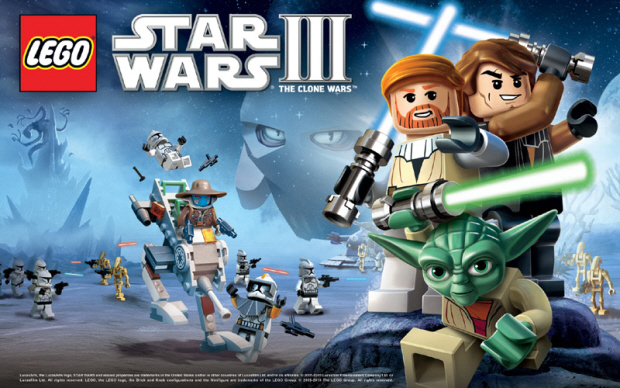 Our Lego Star Wars 3: The Clone Wars walkthrough will guide you through the beginning to ending moments of gameplay for this newest action-adventure game in the Lego series from Warner Bros. and LucasArts. Based on the first two seasons of the popular show and the Star Wars Episode II: Attack of the Clones film. This guide covers the Wii, PC, Xbox 360 and PS3 versions of the game. It also appears on PSP, 3DS and DS.

This newest title takes the best elements of the previous hit Lego Star Wars games while adding some all-new gameplay elements from the RTS genre as you command troops in large-scale battles. In addition, the game includes all new battle modes for head-to-head combat, as well as an upgraded level builder. The new level builder includes customizable bases and in-game battlefields that players can craft for the split-screen multiplayer. The game also includes extensive air combat sections with the new ability to land your craft and fight on foot.

The Story Swap Mode meanwhile allows you to take control of two separate characters in separate locations and switch between them as their unique story lines run simultaneously. You can take control of either a Jedi or a Separatist and have all-new abilities including Squad Command, Lightsaber Jumps, long-distance attacks, Grapple Tie-Ups and a more.

With much improved graphics, physics and special effects, Lego Star Wars 3 is sure to put a smile on the face of any Lego or Star Wars fan, young or old!

Beloved by fans of all ages, the Lego Star Wars games have quickly become best-selling titles across all their releases. Featuring iconic moments from the films, the animated series, and even some fantastic in-jokes for the die-hard fans, the humor and style of the game have garnered an incredible amount of love from both young and old players alike!

The third sequel, Lego Star Wars III: The Clone Wars continues this tradition and brings the games players have come to love into a new world of graphics, massive battles, and tons of new features to keep fans of all ages engaged for hours upon hours. 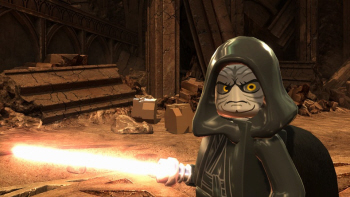 As the Republic and Trade federation became at odds over the growing power each were wielding across the Galaxy, Nute Gunray of the Trade Federation ordered a blockade of Naboo to gain leverage in political dealings.

This ill-advised move quickly backfired, and Senator Palpatine used the event to quickly rise to power as the Supreme Chancellor of the Galactic Republic. Unknown to others in the Senate, the Chancellor was also Darth Sidious, a powerful Sith Lord with a devious and evil plan for the galaxy. In the shadows, Palpatine spent his time growing the forces of an army that would come to be known as the Separatists.

With Chancellor Palpatine now playing both sides against each other, the Jedi Council and the Separatists army began combat in what would come to be known as the Clone Wars. This period would see turmoil and war that would come to affect the Galaxy in ways nobody could have understood.

The Republic, guarded by the fearless Jedi Knights, fights for order and peace throughout the galaxy. Our heroes are under siege by a villainous force with deep ties to the Dark Side.

Little do they know that these forces are working both sides against each other in a game of galactic domination hoping to grow off the ensuing chaos.

As the battle rages on, many who thought their lives were safe behind the front lines will find themselves thrown into the thick of the attacks, and the mettle of the Republic will finally be tested once and for all.

In every game of Dejarik, there are unwitting pawns. So is the case of the Separatists, who charge into battle to take on the Republic at the orders of Count Dooku and Darth Sidious. Comprised of an endless number of droids for the frontlines, the Separatists ruthlessly seek to take control of the galaxy and do away with the Jedi Council forever.

With the terrifying General Grievous at the helm, countless battles have been fought with lives hanging in the balance. The droids show no sign of surrender.

Jedi Master Obi-Wan Kenobi has travelled to Geonosis in pursuit of the bounty hunter Jango Fett. However, he has been captured by Count Dooku, the leader of a Separatist conspiracy against the Republic. Anakin and Padme received Obi-Wan’s distress signal, but they too have been captured.

All three now await their fate in the Geonosian execution arena…

We are now about to kick off the new Lego Star Wars 3 walkthrough!

First you need to follow the on screen instructions, you will need to watch out for the wild kitty’s though.

Jump onto one of the Space Rhinos, you will be able to smash the objects around to get a hold of some studs.

You will also be able to squish the other Star Troopers.