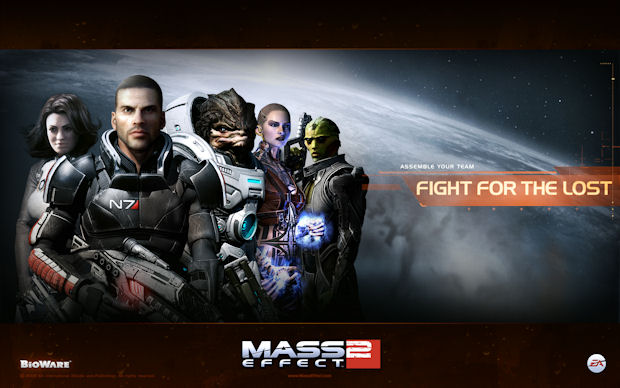 Electronic Arts first released Mass Effect 2 on January 26th, 2010 on Xbox 360 & PC and a year later on PlayStation 3. From BioWare, comes the 3rd person RPG/shooter sequel that continues the story of Commander Shepard who must assemble the galaxy’s most elite team and lead them into the heart of enemy territory to defeat an ancient, sinister threat.

“I’m Commander Shepard, and this is my favorite store on the Citadel.” -Shepard

Entire human colonies on many worlds are vanishing. As Commander Shepard, you must assemble the galaxy’s deadliest team to save mankind against impossible odds. They call it a suicide mission. Prove them wrong!

Assemble a team of powerful operatives — the success or failure of your mission depends on your ability to earn their loyalty.

Hey everyone! So I got into Mass Effect 2 in a BIG way and here is my review about it! I hope you enjoy!!

Agree/disagree with my thoughts? Please feel free to leave a comment letting me know what you think!

Music from the game used in the review:

All the tracks playing in the background are from the official Mass Effect 2 soundtrack purchased from iTunes.co.uk.

The Story of Mass Effect 2 is pretty good as stories go: it begins with Shepard dying and being ‘resurrected’ by shady-at-best company Cerberus. They also hire him/her to face a new threat, ‘The Collectors.’

The story is pretty solid, but the stories of each of the characters and people that inhabit the worlds you explore deserve the real praise here. The development gone into each character, no matter how small, was very impressive! Each character has their own personality, culture, traumas etc. and learning about these is a wonderful touch to the story and verse of ME2.

Overall the story is great (and, now that I’ve started playing ME1, a good carry-on title also.) But it’s getting to know the people around you and the personal histories and stories that really set the game apart.

Gameplay
The Gameplay has a lot to offer. I feel they got a nice mix of action, exploration, dialogue and other things.
There were some issues though. The dialogue options for example could be a little misleading. I personally had a few glitches in my game (only around two or three in my entire Gameplay experience though – not bad.) And lastly, vaulting over objects could be quite awkward. Was I the only one that had this problem?

Bad points over, there were plenty of GREAT elements to mention! The action flowed beautifully; it was smoother to play than the first ME, much easier to control and shoot etc. without loosing the challenge. The exploration was set up well, with destinations available to view through your world map. I personally loved sending out probes to mine and pick up anomalies.

Dialogue gave the player full interactivity in how the story panned out – within reason of course. It helped define your character in-game and the bonds with those around you. Dialogue choices affect your paragon and renegade meter. These can make you a shifty tough guy or pillar of society. What will you choose to be?

You couldn’t sell items in this game, which means you have access to credits more frequently – I like! You can pick up credits, elements, etc. by hacking wall safes and terminals. The little hacking and bypassing ‘mini-games’ were a lot more varied too in ME2 and provided a welcome challenge.

There are also loyalty and side missions to complete. These range from finding and killing a notorious bad guy, to finding out what happened on a drifting, ‘Mary Celeste’ style shuttle. Loyalty missions gain, surprise surprise, LOYALTY from your crew. This proves to be helpful later on the game.
Overall, the Gameplay is great! There are some things to work-on/correct for the third title (which is a good thing) but gives the player enough variety, making boredom an impossibility.

Graphics
The graphics and environments were great In Mass Effect 2.
The short cinematic sequences that play upon exiting and entering a planet were really great. The locales were fantastic, the textures were great, the colours weren’t too dull or ‘samey.’

The character models were good, sometimes the mouths didn’t match what was being said but that’s forgivable don’t you think? I know it didn’t throw me out of the moment at all.

Overall, I’m not going to say much more about the visuals, as I don’t think it’s a key feature of the game. They support the already great Gameplay and story but other than that I wouldn’t say it’s solely the reason WHY this game is fantastic.

The soundtrack was amazing! I would buy it – all two discs – if I weren’t so poor!
It combines a kind of blade-runner synthesized ‘Vangelis’ sound with epic orchestral scores. Now a lot of people have said to me that they prefer the less orchestral score from ME1, but I like this new element!

There are certain sounds we as an audience associate with a genre, of course you can change this rule, but for a game that bases itself in such a popular and well-known genre – ‘the Space Epic’ – it has changed its sound accordingly. I adore it!

It has the eighties sci-fi touch mixed in with this epic score that makes the game more dangerous, blockbuster-esque and grand. Tracks of note would be End Run, Suicide Mission, Reflections, Mordin, and Samara – just to name a few!

Overall, the score is perfect. The music in the final scenes brought a lump to my throat – definite signs of a perfect soundtrack.

This game has joined the ranks of Heavy Rain and many other titles on my favourites list. I think it’s great, not perfect, but darn close!
Overall I would give it a fun-factor of 9.5 out of 10! It’ll be exciting to see what they do for the third instalment of Mass Effect. I know I’m excited! But what would you guys like to see? Are there elements of ME1 that they left out in the second title that perhaps you’d like to see them bring back? What did you make of the sequel? Do you like the franchise at all?

Please leave your thoughts and feelings below. Thank you for watching; I always love to hear what you guys have to say!

For help with the game, check out our Mass Effect 2 walkthrough.