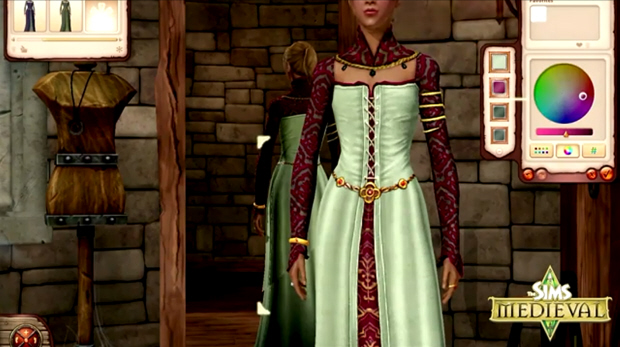 The Sims Medieval will be released on March 22, 2011 exclusively for the PC and Mac.

A fourth documentary video has also been released that focuses on the RPG-elements that have been crafted into The Sims Medieval, ranging from Quests to character building, which will give it much more meat on the bones in comparison to previous games in the series.

The Sims Medieval is a brand new standalone game from The Sims Studio, creators of best-selling games such as The Sims 3, and marks a departure from the traditional The Sims games with all-new features and gameplay.

Once Upon A Time – The Sims Medieval Webisode 4

Set in medieval times, players now have the opportunity to build up a medieval kingdom, go on quests, level-up their characters and fulfill storyline elements. Players will find their Sims, the characters unique to The Sims games, in a variety of situations previously unknown to them like duels to the death, choosing whether to poison a witch or marry her and punishing Sims by having them thrown into the Pit of Judgment. Every quest plays out differently depending on which Hero Sim the player is controlling.

Everything in The Sims Medieval is crafted to create an immersive medieval world, from the quest-based gameplay, to the medieval objects such as swords and stocks and thrones, right down to the warm look of the characters and the painterly approach to the world itself.

Players can choose to customize every new Hero Sim that comes to the kingdom, including selecting their traits and their fatal flaw. Players get close to their characters, not only sending them on epic quests, but also making sure they carry out their daily responsibilities such as healing the sick, trading for exotic goods, or forging armor.

Here are the previous three featurettes in case you missed them.

Once Upon A Time – The Sims Medieval Webisode 3

Once Upon A Time – The Sims Medieval Webisode 2

Once Upon A Time – The Sims Medieval Webisode 1