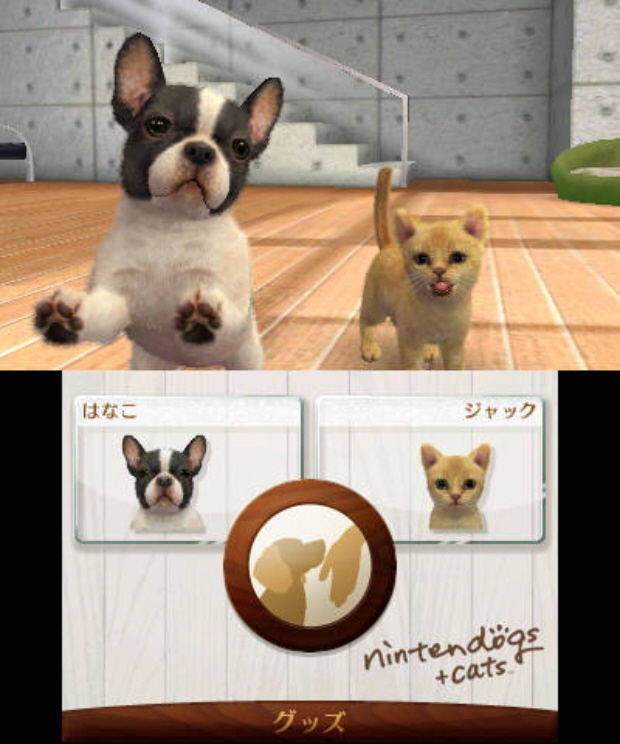 30 dog and cat breeds are available in Nintendogs + Cats, which is one of the most highly anticipated Nintendo 3DS launch games and the follow-up to one of the biggest selling early-on titles for the original Nintendo DS ( having launched in 2005; One year after the debut of the system).

The games were so popular that combined for all versions they have sold over 22 million copies, making Nintendogs the third standalone best-selling videogame of all time.

Nintendogs is a real-time pet simulation game where you raise, breed, groom and play with a realistic pet and it used every feature of the Nintendo DS, from the microphone (teaching the dog to learn tricks by speaking them, and speaking their name) to the touch-screen (realistically pet it!), to interact with your new friend.

Nintendogs + Cats follows in those same footsteps, while taking the series a step further due to the new features of the 3DS. Not only will your pet appear in glasses-free stereoscopic 3D with graphics that are leagues better than the first game; it also uses facial recognition technology to make your pet recognize you (using the camera on the 3DS)… your pet will follow you with it’s head and tilt along with how you tilt the system and if you put the system close to your face the dog will even lick it… as if it was licking you in real-life! Speaking of which, the game even makes use of the Nintendo Augmented Reality Cards (which are included with your system) to bring your pet into the real world!

And like the first game, there will be three different versions of Nintendogs + Cats. Each game contains all of the different breeds, but the initial 9 will depend on what version you select, you’ll have to keep playing to unlock the other breeds.

Hopefully more Cat Breeds will be added later on as downloadable content.

Here is a look at the game.

What dog or cat breeds do not appear that you wish the game included?