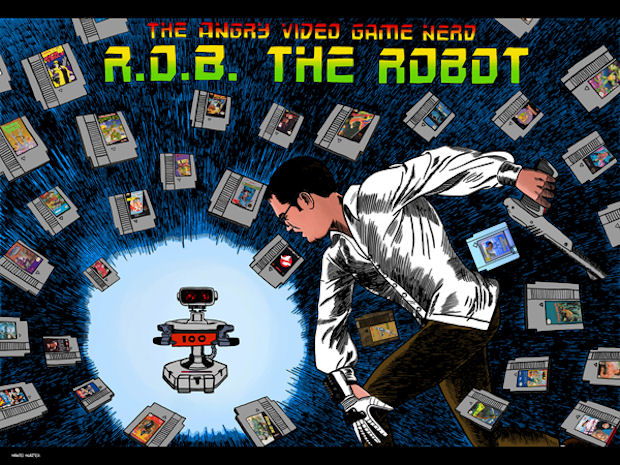 This is the 100th episode in a series of reviews of bad video games by the Angry Video Game Nerd. Watch as the Angry Nerd reviews R.O.B. the Robot and its games Gyromite and Stack-Up that appeared on the NES in 1985.

Gyromite Box description: “You’ll need R.O.B. – the world’s first Robotic Operating Buddy – to play this action-packed game! You’ve got to keep R.O.B.’s gyroscope spinning in order to help a mad scientist deactivate all the dynamite in his laboratory. You’ll move columns up and down to speed the scientist on his way while trying to avoid the lethal Smicks. And you’ll get him to his dynamite even faster if you can get R.O.B. to spin two gyros at the same time! But don’t take your eyes off the scientist, because anything can happen in GYROMITE! Where two hands and one pair of eyes aren’t always enough!”

The 100th episode has arrived! Nintendo’s first accessory meets the Nerd!
As always, violence and comedic yet coarse language ahead…

Congrats Nerd! At VGB we’ve been big fans since your early Angry Nintendo Nerd days on Youtube. Here’s to a hundred more episodes! 😀