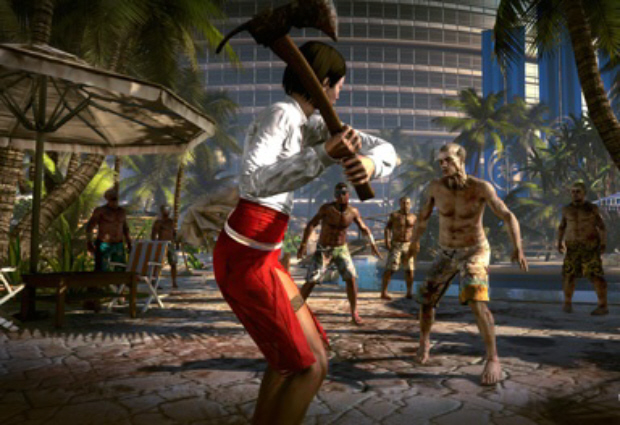 Dead Island has been officially re-announced with a breathtaking, emotional, disturbingly cinematic new trailer for the upcoming “first-person zombie-slasher action RPG” that’s been in development since 2007.

This open-world action game promises to take the zombie formula sweeping the media world and spin it in new directions by making a personal, story-driven adventure that focuses on realism. In this game, you must use what is on-hand to survive the zombie onslaught on the tropical paradise island of Banoi. Unlike most zombie games, you’re weapons are limited and will weaken with each hit as you struggle to stay alive.

Dead Island promises to put the survival back in survival horror. Most of the combat will be up-close and personal as you intimately get in the undead’s face with your fists or blunt objects, from axes to baseball bats to knives, machetes, broomsticks and pipes; you must slowly beat your enemies away or into submission so you can quickly get the hell out. Firearms are few and far between with ammo even harder to come by. Making it very possible that each battle may be your last.

And while this description may paint Dead Island with similarities to other zombie games, say Dead Rising, it couldn’t be further from the truth. Described by developer Techland and publisher Deep Silver as “dark, twisted and gritty”; the game is as different as Resident Evil remake was to Resident Evil 5. A completely new, more atmosphere, more realistic take on the same style and subject matter we’ve seen a hundred times before. Except those games didn’t have fully modeled “layers of muscle and meat” rendered beneath each foe…. You heard that right. From lethal sprays of blood to blood-curtling; realistic screams to extremely realistic “slicing and dicing” effects, Dead Island is not for the faint-of-heart.

Here is the all-new announcement trailer. It’s quite disturbing so watch at your own discretion.

And here is a fanmade “reverse-scene” take on the same trailer, which allows you to see how the events of the above trailer REALLY happened.

This is how the developer describes the game:

“The island of Banoi is a lush, tropical paradise in the South Pacific where its flagship Royal Palms Resort serves as the ultimate getaway for vacationers with money to burn. However, all good things must soon come to an end – and the picturesque resort falls into madness, carnage and chaos after a mysterious and contagious zombie outbreak claims its once peaceful atmosphere. Cut off from the rest of the world, only four individuals who strangely find themselves immune to zombification have the power to protect the remaining survivors from the horrors of the island, to discover what’s really going on and find a way to escape before their own fatal ends.”