All of this is to celebrate the TWENTY YEAR anniversary of Final Fantasy IV, the highly acclaimed, grand story of the Dark Knight Cecil and an unforgettable cast of characters that defined Final Fantasy on the 16-bit Super Nintendo Entertainment System. Upon its release way back in 1991 it was highly regarded as the best RPG ever made.

It is worth noting that this new PSP version is an updated or direct port of the Game Boy Advance version of Final Fantasy IV released in 2005 that included an updated English translation, enhanced graphics, updated music and a new dungeon (not known if the dungeon from this version will make it in). In addition the PSP version will include all of the CG cutscenes that were added to the PSOne re-release of the game from the “Final Fantasy Chronicles” set in 2001. These cut-scenes were also included in the DS remake that featured 3D graphics and a complete re-working of the game. 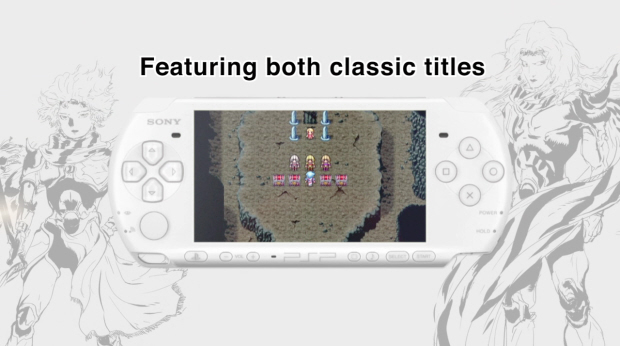 This PSP version is NOT that 3D DS version. This game features 2D graphics (albeit, very sharp and highly polished ones) but with included CG cutscenes. Thus it falls perfectly in line with the previous PSP remakes of Final Fantasy 1 and Final Fantasy II for PSP, which are basically the definitive versions of the original games, including new stories that tie the original game and The After Years together, new characters and a new, arranged soundtrack.

Key features of Final Fantasy IV: The Complete Collection for PSP include:

“In honor of the 20th Anniversary since the initial launch, we are releasing FINAL FANTASY IV: THE COMPLETE COLLECTION this April, 2011. We hope fans will enjoy and celebrate not only the original and complete game experience but the addition of new and never-before-seen levels,” said Ami Blaire, vice president of marketing, Square Enix, Inc.

About FINAL FANTASY IV
Since its initial release in 1991 on the SNES, FINAL FANTASY IV has been popular across several platforms, and this year celebrates its 20th anniversary. With its high-quality graphics and scenarios, and the introduction of the active time battle system, FINAL FANTASY IV redefined role-playing video games and shaped FINAL FANTASY titles to come.

About THE AFTER YEARS
THE AFTER YEARS is a true sequel set more than a decade after the events of FINAL FANTASY IV. The story revolves around Cecil and Rosa’s son, Ceodore, as he ventures out to unravel the mysterious events surrounding the Blue Planet. In addition to the new characters, characters from the original title, such as Cecil, Rosa and Kain will be reunited. Players can enjoy the FINAL FANTASY IV experience with enhanced battles and the brand-new Band system feature.