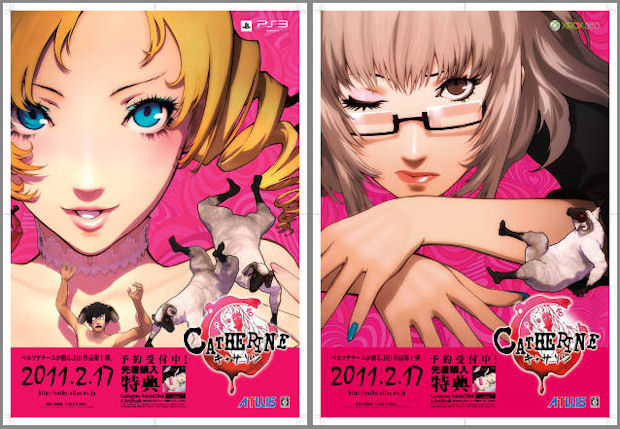 Atlus released a Catherine demo in Japan on the PlayStation Store and Xbox Live Marketplace the other day. In this “Let’s Play” Tokyodome plays through it, while translating the Japanese for us on the go.

Atlus’ Persona Team are behind this action-adventure game, that combines puzzle and survival-horror elements. It’s their next-gen HD game debut and they are promising a 20-hour-long single-player campaign with multiple endings, and competitive multiplayer modes on top of that.

In the Catherine demo you’ll be able to sample a selection of the game’s opening feature event movies, anime cutscenes, and gameplay action parts. The full retail version of Catherine has only been announced for release in Japan, where it hits on February 17th, 2011 for PlayStation 3 and Xbox 360.

The storyline of Catherine is quite frankly a mystery, not just because not a lot is known, but mostly because it’s incredibly bizarre! You control Vincent, a 30-year-old guy who meets a strange girl named Catherine, after which he begins to have strange nightmares, that may or may not end up killing him. As you’ll see from the videos below, the main story mode, called Golden Theater, follows the story between Daytime and Nightmare scenarios. During the daytime, Vincent will converse with his friends as well as try to handle his relationship with the two women, Catherine and Katherine. But during the nighttime he lives recurring nightmares in which he is climbing a never-ending staircase.

Oh and did I mention the red-eyed sheep yet? Yeah they somehow play into all of this as well with our main character slowly changing into one of them…

In the first part Stage 1: Underground Cemetery is played. Be aware this is a mature rated game in Japan. Not to mention that the F-bomb is dropped a few times during the translation to English, so some coarse language is ahead. That said, this is a really cool look at a game that may never be released in the West.


In the third part we get to see the Day 2: Prison of Despair nightmare & Vincent’s Room.

The promotional text reads: “If you sleep, nightmares. If you wake up, a scene of carnage.”

Who would you go for in the game? Catherine C or Catherine K?

Thanks to Tokyodome for the videos!