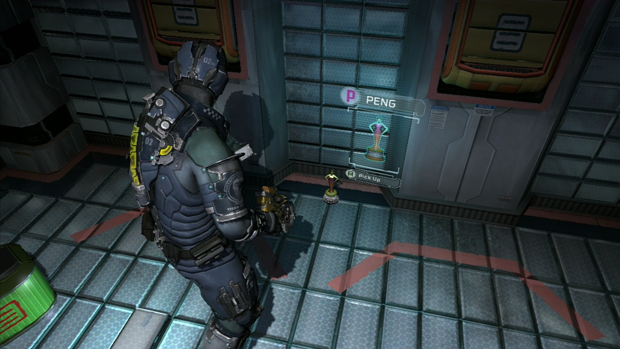 Here is the location of Peng in Dead Space 2’s Xbox 360, PS3 and PC versions.

If you are playing the Xbox 360 version, you will unlock the achievement called Collect Peng, worth 20 Gamerscore, when you find the Peng treasure.

If you are playing on the PlayStation 3 version, you will awarded a Silver Trophy when collecting Peng.

How to get to the Peng Location:

You will find Peng in Chapter 7 when you reach the part when you will have to disable the security mainframe. You can either disable the mainframe before or after you collect Peng.

In order to unlock the secret room where Peng and other items are at, you need to put the circuits in each room in the same specific order, as will be shown in the video above. You will also find this diagram placed on the floor in front of the windows in each room.

You need to use your kinesis to pull off each of the 3 panels in each room. Then use kinesis to move the circuits into place in the main panel with 4 sockets.

Once you have placed the circuits in the correct order in each room, reroute the tunnel from the room you are currently in and it will lead to the secret room in the back containing the Peng.

Thanks for visiting this guide, check out our other Dead Space 2 Guides!