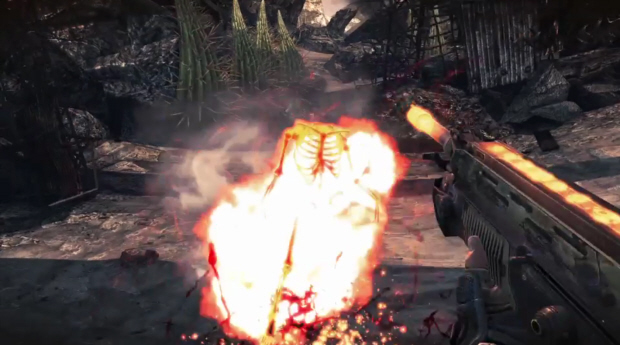 The Bulletstorm weapons list includes some flat out badass weapons that are not only part of your kill arsental, but part of your SKILL arsenal.

Bulletstorm isn’t like a typical shooter, here, your weapons, enemies, and environments all play together and you must use your weapons creatively to figure out the best way to effectively take them out for the most points.

This weapons trailer gives you an in-depth look at each of the core weapons in Bulletstorm.

Boneduster – Four-barrel shotgun that shoots high-impact air and pushes enemies away at great speed. The alternative fire is a charged shot that incinerates the target.
Bouncer – A portable cannonball launcher. The ball can be charged up to bounce around before a delayed detonation.
Energy Leash – This versatile whip-like energy rope is always available on Grayson’s left arm. Players can use it to pull enemies towards themselves, causing the targets to float in slow motion for a limited amount of time. It can be slammed on the ground, causing all nearby targets to be thrown up in the air. The leash can also be used to interact with most objects in the environment.
Flail Gun – The flail fun fires two grenades tied together by a chain. The grenade explosion is delayed by default. The alternate fire superheats the chain, causing it to burn and instantly cut through enemies.
Peace Maker Carbine (PMC) – A basic assault rifle can be modified with attachments. The PMC also be charged to do additional explosive damage. The alternate fire is an ironsight mode, similar to red-dot scopes in most modern military shooters.
The Mini Gun – A standard gatling gun with a high rate of fire. Carrying the gun slows down player movement.