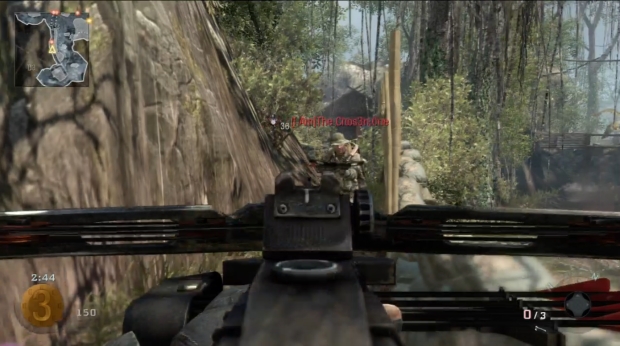 If you want to skip straight to the action check out the video review.

What do you think of the game? Let me know in the comments.

Graphics — 8
Call Of Duty Black Ops has seen a another huge graphical leap forward thanks to the improved IW engine that has been revamped since Treyarch’s last Call of Duty title World at War.

The cut scenes and huge battle set pieces are all a joy even just to watch.

The attention to detail rings through in the weaponry, all of these real life current combat weapons are superbly recreated all the way down to the scratches and scuff’s.

Gameplay — 9
Call Of Duty has worked hard to become the FPS title most strive to hold up to and this time around they have not disappointed, the campaign mode is a solid 6 hours of pure cinematic bliss with a story that will take your through a huge journey across many different scenario’s like escaping a soviet prison camp or sneaking through the jungles of Vietnam.

The multiplayer side of things allows up to 18 players to battle it out online, and really adds an extra level of depth to multiplayer with new additions like the new cinema mode that allows players to replay previous matches from various camera angles, or fancy a match with a little money on the table try the new wager match mode where players can gamble their hard-earned COD points (in-game currency for upgrades and weapons) against each other in a variety of modes that will test both skill and agility.

Audio — 8
Every bang, boom and crash is heard and very true to the real thing, there’s no need to add the amazing soundtrack when you’re surrounded by the sound of real battle, but when it does kick in it simply throws the action into overdrive.

Voice acting is spot on and doesn’t disappoint either as is a common flaw in many FPS style games, a joy to listen to.

Ingenuity — 6
Is there anything new in Black Ops? The answer is “No”, this is Call of Duty and yes it’s the same as every other title released same single player, same multiplayer with the exception of a few game type additions and the cinema mode although this was seen as far back as Halo 3, so it’s nothing groundbreaking.

But that said, with the age-old adage of “If it aint broke don’t fix it” it makes sense to stick with small updates instead of changing what people love about the series.

OVERALL FUN-FACTOR — 9
This is Call Of Duty and Treyarch have done a fantastic job of listening to the community involved, and taken onboard some of the failings of Modern Warfare 2 and made sure that it hasn’t happened again. With that kind of player dedication it’s no wonder Black Ops may just be the finest in the series so far. On your own, or with friends, Black Ops will not disappoint.

For help with the game, check out our Call of Duty: Black Ops walkthrough.