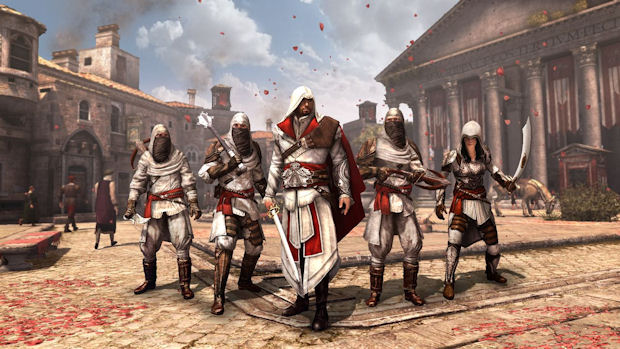 Assassin’s Creed: Brotherhood is a sandbox action-adventure game developed by Ubisoft and was first released on November 16, 2010 for Xbox 360, PlayStation 3 consoles, and will come out later this year for Microsoft Windows PC’s. The game is the third installment of the main Assassin’s Creed series, and the second to be set in the Renaissance. As it’s a direct sequel to Assassin’s Creed II, you’ll follow the further adventures of Ezio Auditore da Firenze.

Here is my video review of Assassin’s Creed: Brotherhood!

Agree/disagree with my thoughts? Please feel free to leave a comment letting me know what you think! I love me a good game discussion haha XD

Music from the game used in the video review:

All the music in this review is from the official Assassin’s Creed: Brotherhood score by Jesper Kyd. In the order they appear:

Story
The plot to Brotherhood is convoluted much like the other games. The plots and events are all rooted in historical fact, with the right amount of fiction thrown in. I feel though, that the game could have easily been titled “The Further Exploits of Ezio.” Because it really felt like an add-on story-wise, which technically it is, but I was hoping it wouldn’t feel that way.

Gameplay
The gameplay works beautifully. For story, visuals and music I can’t praise it enough as it improves on all elements from the previous games. For example, swordplay and combat was a lot smoother and a lot more user-friendly this time around.

More varied missions in both content and difficulty. There were some new elements too that really spices up your overall gameplay experience. For example, in Brotherhood you can recruit new assassins and send them off on their own individual missions to level them up and train them to fight by your side, which is PRETTY COOL in my book. Same for the many ways of generating Rome’s income and a wide choice of weapons for purchase.

I want to note, though, that the cutscenes didn’t seem to flow into the gameplay quite as seamlessly as it did in the previous games.

Graphics
The graphics are spectacular. Brotherhood adds some much-needed color to the palette. There was a lot more depth to the visual in the game overall, with the exception of the present time sequences, which I felt were a little bit dull… then again, they all took place in ruins so it’s gonna feel a little dead. There is a huge variety of people in the background who inject color and life to the setting. The textures were almost tangible, it was like you could just reach into the screen and touch the stone wall or jump in the hay.

I did notice, though, that the animation or modelling with the women in the game (and the dresses especially) was way off in parts. I’m sure this won’t bother everybody, but having done my fair share of animation it really threw me out of the moment.

Audio
The score was composed by Jesper Kyd, who worked on the previous titles in the franchise, but I can’t say the Brotherhood score really stood out that much.
Maybe that was the point, but it seemed to disappear behind the action. I did like the operatic interludes that seemed to echo through, as well as what I like to call the “assassination track”.

I think, overall, the scored lacked compared to its predecessors.

Replay Value
In Assassin’s Creed: Brotherhood, players live and breathe as Ezio, a legendary Master Assassin, to experience more than 15 hours of single player gameplay set in the teeming, unpredictable city of Renaissance Rome. For the first time, multiplayer is coming to the Assassin’s Creed franchise, allowing players to choose from a wide range of unique characters, each with their own signature weapons and assassination techniques.

OVERALL FUN-FACTOR — 9
The thing that made this game so much fun is the gameplay. It exceeded the story, visuals and music, which were all great but not quite as compelling as the gameplay. It’s a good add-on and I feel like the gang at Ubisoft Montreal [It’s pronounced ‘Mon-tree-awl’ Meg; -Editor] worked at perfecting their craft at this game.

I give Assassin’s Creed: Brotherhood, including the multiplayer, a 9 out of 10. Because the gameplay is near-perfect and really fun to play, which is what videogames are about.

For help with the game, check out our giant Assassin’s Creed: Brotherhood walkthrough.