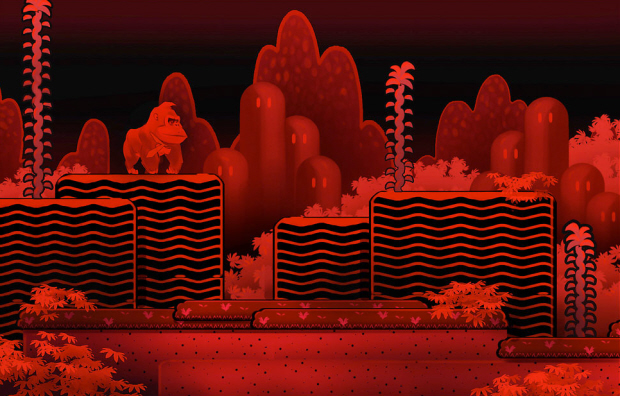 Feast your eyes on the absolutely GORGEOUS image above. This concept art for Retro Studio’s critically acclaimed ape-sized Wii hit, Donkey Kong Country Returns, shows off some of the really awesome ideas that the studio known for Metroid Prime Trilogy had in the works for the title, but were ultimately scrapped for the final game. Perhaps the VB-red level will be in unavoidable the sequel?

As you can see in the picture above, one idea was to take Donkey Kong back to the oft-forgotten Virtual Boy era with a level/area that would play out just like a classic Virtual Boy title! Awash in the familiar Virtual Boy colors of red and black, the screenshot is made even more interesting because of the fact that the level appears to be based off Super Mario Bros. 2! Crossover much? There is also an art piece showing the Mine cart sections through the Virtual Boy lens! 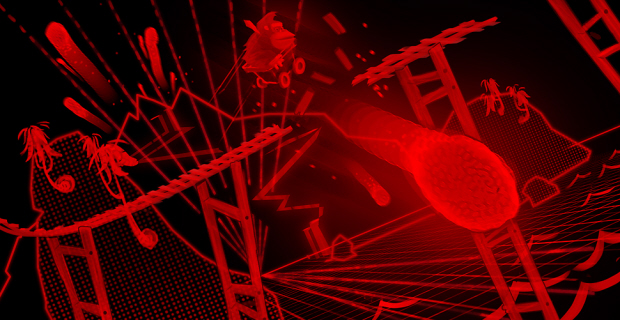 Or maybe all this was just a planned Virtual Boy visual filter for the game? Either way, it reminds us that there is still love for the little “Boy that could… Not”, a system with a couple gems that very few gamers have ever heard of, much less played. There actually WAS a Donkey Kong Country 2 Virtual Boy game in development at Rare, so that makes this screenshot even more interesting to my fully functional eyes.

And of course, with the possible realization that 3DS Virtual Boy games could be re-released since that system actually does glasses-free 3D, any Virtual Boy news is exciting news. And I can only hope that Nintendo dives into the little known catalog of Virtual Boy titles and re-releases them: games like VB Wario Land, Mario Clash and 3D Tetris deserve to be experienced! Not to mention completed but unreleased VB games like Zero Racers, Bound High and Dragon Hopper.

Thanks to artist Sammy Hall via Conceptart.org for posting these true works of art. Check out more visual styles and concept pieces at his gallery.