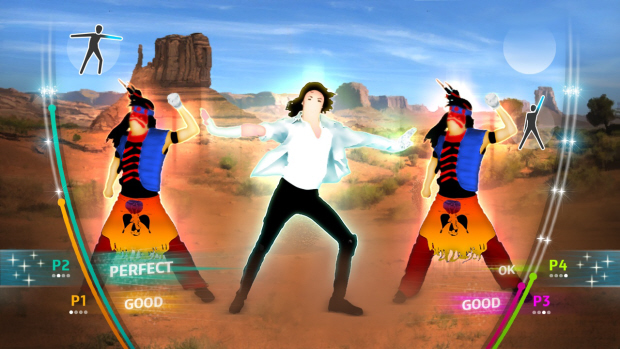 Michael Jackson: The Experience will be released for Kinect and PlayStation Move on April 12, 2011 in North America. The Xbox 360 and PS3 version will hit Europe, the Middle East and Asian territories on April 14, 2011.

New to Kinect and PlayStation Move version (in addition to the motion controls/camera controls) are the songs “Blood on the Dance Floor” and “I Just Can’t Stop Loving You” with additional tracks to be revealed soon.

The new PS3 & Xbox 360 versions will include new exclusive features that greatly enrich the player’s experience.

Here is a video showing off a bit of Kinect gameplay and comparing it to the Wii version.

In the Kinect version, Ubisoft’s proprietary Player Projection technology projects the player on-screen and into the game itself. The player’s body is tracked, allowing them to see their true movements and steps reproduced in the game.

This level of immersion allows players to be surrounded by environments inspired by the music videos and live performances of each Michael Jackson song. Innovative co-op and Battle multiplayer modes allow up to four players to collaborate or compete for the best performer prize with the Kinect version. In addition, different difficulty levels and a practice mode ensure that the game is both accessible and challenging.

Unique to the PlayStation Move version is an automatic Facebook feed that allows the player to instantly post his/her progress and pictures of themselves playing the game to their Facebook page, showcasing their Michael Jackson skills for friends to admire. The game play also adapts to the available hardware (Move only, microphone only or Move plus microphone) and offers dancing, singing or dancing and singing depending on the accessories owned by the player.

Additionally, the Michael Jackson School Mode takes advantage of both the Playstation Eye and Kinect by allowing players to see themselves on screen at the side of renowned dancers that actually worked with Michael Jackson to learn the iconic moves of the King of Pop.

Ubisoft also revealed that Michael Jackson: The Experience has been a raging success on the platforms it launched on during the holiday. The Wii, DS and PSP versions of the game have sold through two million units in total worldwide. This does not include Japan (who will be getting the Xbox 360 and PS3 versions later this year).

Launched November 23, 2010 in North America and November 25, 2010 in Europe, the Middle East, and select Asian territories, Michael Jackson The Experience allows players to experience the magic of the King of Pop by performing dance steps that were inspired by the choreography of Michael Jackson in environments that were drawn from his world and all while listening to and singing along with the music that continues to excite and move people today.

“Michael Jackson The Experience is a worldwide hit and offers fans the game they have been waiting for,” said Yves Guillemot, chief executive officer of Ubisoft. “As the leader in the dance game genre, our teams have worked enthusiastically to build an experience that recreates the magic worlds of Michael Jackson’s videos and performances. We’re looking forward to bringing Michael Jackson The Experience to Kinect and Move so an even bigger audience can enjoy playing the game with their friends and family too.”

“We are extremely thrilled with how people around the world are embracing and enjoying Michael Jackson The Experience,” said John Branca and John McClain, the executors of the Estate of Michael Jackson. “The passion they are showing for learning and performing Michael’s signature dance moves to the songs they have loved for years is a tribute to his amazing legacy. Families are sharing an entertainment experience that is fun, unique and energizing.”

Thanks to AngryJoeShow for the video.