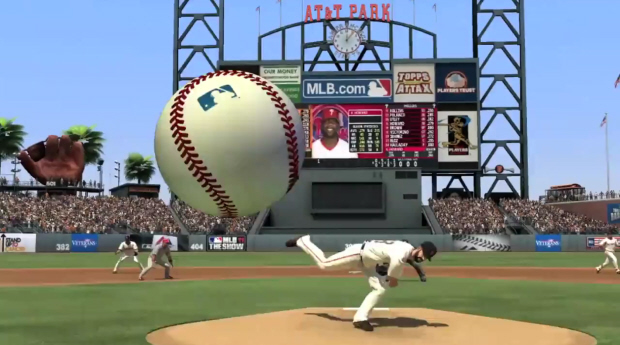 The newest Major League Baseball game from Sony will include a number of new changes, additions and shake-ups from last year’s game.

For the first time this game will feature fully analog controls, where players can control pitching, hitting and fielding all using the two control sticks on the PS3 (not sure how this will work on PSP but sure they’ll figure something out).

“This is the feature everyone has wanted in our game for years, but we didn’t want to do it until we could do it right,” game producer Chris Gill told ESPN.

Fielding controls are mapped to the right stick and match the baseball diamond (move the stick to the right to throw to first base, for example), with accuracy depending on how accurately players move the stick. Hitting meanwhile requires players to pull back to get ready and then push up to swing. You can choose whether you want to focus on Power or Contact and can guess the location or type of pitch.

Pitching meanwhile has the player pulling back to wind up and pushing up to throw. But there’s definitely more to it than that.

“This causes the ball on the meter to drop toward a line about three-quarters of the way down. As soon as the ball hits the line, the pitcher will then press up on the right stick, but here’s the twist — if your location is on the outside part of the plate to a right-handed batter, you’ll need to press up and to the right in order to guide the ball into the target that will appear at the top of the meter.” The speed of the ball will change depending on how quickly players push up on the stick.

Other new feature announcements include:

Last but not least, here is an all-new announcement trailer.