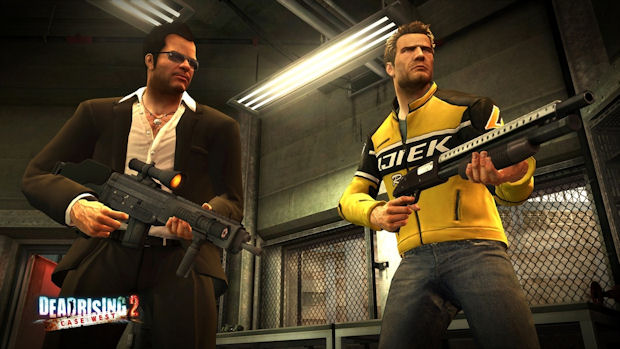 This Dead Rising 2: Case West walkthrough will guide you through the beginning to ending moments of cutscenes and gameplay for this Xbox 360 game DLC that continues the Dead Rising 2 story.

Frank West and Chuck Greene fight side by side in this explosive addition to Dead Rising 2! Chuck Greene has lost the evidence that would have cleared his name. In his darkest hour Frank West appears and offers one last chance for Chuck to redeem himself. Together, the pair heads to a secret Zombrex research facility where they hope to uncover evidence that will exonerate Chuck, and shed some light on Phenotrans’ sinister plot. Case West re-introduces the ability to take pictures in-game. Two players can also play together as Chuck and Frank in the full-featured co-op mode!

Quick facts you should know about Frank:
1. Frank West fights alongside Chuck.
2. You can give Frank weapons. He’ll be able to use any weapon you find. Approach Frank with the weapon in hand and press the B button to give it to him.
3. These aren’t the first zombies Frank has encountered. He can take care of himself.

The Case West storyline goes as follows: “Years ago, a zombie parasite was introduced to the population of Willametta, Colorado as an act of vengeance for the unchecked experiments that devastated the South American town of Santa Cabeza.

Outbreaks have since sprung up in cities across the United States, including Las Vegas and Fortune City, Nevada.

Chuck Greene, the man framed for the Fortune City incident, is fighting for his life…”

Case 1-1 Part 2: Escape Through The Container

Tip: You can quickly access the map by pressing the Back button.

Tip: Save your game by visiting a restroom.

Goal and Destination in Case 2-3: Check back with the source at the Shipping Office Terminal.

Then in Cases 3-1 and 3-2 give the source time to figure out how to get us into the Secure Lab, but when all else fails we’re told to grab some C4 explosives and from the security tower and a detonator from the storage bay. This will let us blow up the power generator to access the doors to the Secure Lab.

Tip: Go to the Status Screen in the Pause Menu to see a list of skill moves you can use.

Goal and Destination in Case 3-3: Let’s get to the Secure Lab, meet with the source, and together get out of here. The source turns out to be Isabella! Before they can escape, she’s caught and there’s the Commander Kuti final boss battle. Beating him leads to the (open) ending of the game.

Thanks to Mediacows for the walkthrough videos.