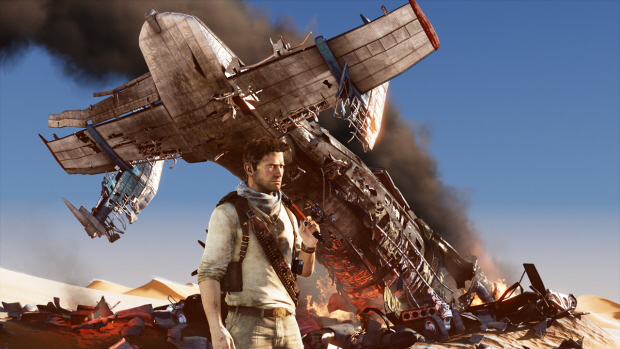 Uncharted 3: Drake’s Deception has been officially announced with a release set for 2011 in stereoscopic 3D!

Naturally, the PlayStation 3-exclusive has a huge name to live up to after the tremendous success of the Uncharted 2, so it will be interesting to see if the team at Naughty Dog can do so in such a short time period.

The game will feature a storyline that sees Drake and Sully on the search for a mysterious lost city, in a journey that will take them through the deserts of the Arabian Peninsula and into Rub’ al Khali Desert. Additionally, the real stories of British Army officer and archeologist T.E. Lawrence of Arabia will also feature into the tale (the Drake games are lifted from the real-life stories of Sir Francis Drake in case you didn’t know).

But what’s probably the most surprising thing is the fact that the game is already PLAYABLE. Entertainment Weekly got their hands on the game and has reported that Drake can now fight several enemies at one time thanks to combat tweaks and that the game will offer an “expanded” multiplayer offering.

More will be revealed at the SpikeTV Video Game Awards 2010 this Saturday, and the developers will be appearing on Late Night with Jimmy Fallon with an even greater look at the game on Monday, December 13th. Including a live stage demo!