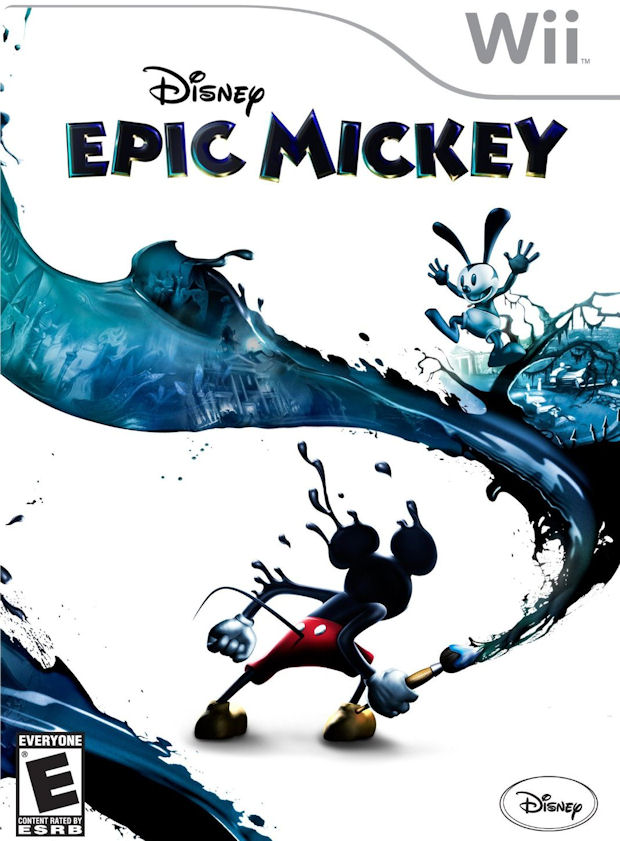 Our Disney Epic Mickey walkthrough will guide you through the beginning to ending moments of cutscenes and gameplay for the Nintendo Wii-exclusive reboot of the Mickey Mouse character. This was done to show his more devious fun side, and made a reality by videogame designer Warren Spector in collaboration with Walt Disney Animation Studios and Pixar.

Disney Epic Mickey is an action-adventure platforming game for the Wii console that sends Mickey Mouse on an epic journey of creativity and discovery. As Mickey, you are propelled into Wasteland, an alternate world made up of Disney’s forgotten cartoon characters and attractions, including Mickey’s lost older brother Oswald the Lucky Rabbit.

Once in the world you’re given the power to wield paint and paint thinner to dynamically change the world while determining Mickey’s path to becoming an epic hero. Through the use of this unique paint and paint thinner, you will have the ability to shape how the story unfolds. Will you make friends out of enemies by restoring the world or will you simply delete whoever is in your way?

Let’s get started! You’ll get voice-over walkthrough videos by Rob and text tips by Megan.

The game introduction cinematic explains the story behind the creation of Wasteland, its inhabitants, and Mickey’s role in the great thinner disaster.

Aim your Wii Remote at the target. While on friends the aim reticule will light up green, on enemies it will turn red indicating danger. Many enemies will be stunned when you jump on them. There are two ways to fight enemies:
1. Hit them with Thinner to thin them out. Don’t forget that a thinned toon can be restored with Paint.
2. Hit them with Paint to turn them friendly. They will stay friendly until hit with too much Thinner.

As soon as the mad scientist machines goes mad! Run up to meet Gus the gremlin.

Use your spin attack to break the first control panel.

Watch out for the mechanical arm as you attempt to destroy the second control panel.

Destroying the mechanical arm will reveal a secret room. There is a bronze pin hidden in the chest in that room.

After collecting the pin, head back to meet Gus at the main door.

Whilst leaving the castle, Gus will teach you how to use paint and thinners.

Use your spin attack on barrels throughout the levels to refill your paint and thinners.

To free Calvin the gremlin use your spin attack to activate the gears of the catapult, then it is up to you to break open the chest to free Calvin. You will receive a gold pin if you decide to free Calvin.

Use your thinners on the large stone blocks to remove obstacles from your way.

After making your way up the broken stair way, you will come across a gear that you can activate by using your spin attack, you will need to activate one more gear to open the Oswald door.

Use thinners on the floor below the rock piles that block your way in reaching the second gear.

You can then repaint the floor to continue ahead. This will reveal your first projector screen called Mickey and the Beanstalk.

Projector 1: Mickey And The Beanstalk

The projection screen level, is a 2D platforming level, during this portion you will not have any access to paints or thinners. So remember to take your time and especially take your time with your jumps and plan them to reach the movie projector at the top of the bean stalk.

As soon as you arrive in the gremlin room, you will need to repaint some gears to open the doors.

You will then have to repaint a broken pipe. There will be a series of broken pipes after that. You will need to repaint these to reach a large spinning gear with platforms. Gus will advise you to use your double jump.

If you miss a platform you will be able to repaint extras.

Take on the two spatters (enemies) that arrive and after beating them the locked room will open.

The quests in epic Mickey can begin at any time, you will begin this quest as “The Toll Booth” but very quickly you will be given a second quest called “Navigate the Asia Boat Ride” these will sometimes overlap during your gameplay.

After defeating all the Blotlings, Tim the gremlin will allow you access to the boats.

A short cutscene will follow explaining the use of guardians.

After riding the boats you will come to a dead end, you will need to use thinners on the broken pipes to open the door ahead.

By using paint thinners on all three pipes you will open the door.

Sweepers are creatures able to uses thinners as a weapon so be careful.

Enter through the gap on your left to reach Trigo the gremlin.

Enter through the gap on your left to reach Trigo.

After riding the boat, jump onto the first available platform just before the whirlpool, you can then make your way down to free another gremlin locked away underneath the big giraffe.

Any gremlins you have saved so far, will now aid Mickey by turning some of the valves. Activate the remaining valve switches to open the door.

The door will shut behind Mickey revealing a room filled with steam pipes and valve switches.

Stepping on the pressure platform will shut off the steam for ten seconds. Mickey will need to move quickly to activate all three switches in time. After activating all three switches, small Pete will arrive asking Mickey to find his ships log book.

Breaking the China dolls on the side of the hut will allow you to access a gear that will allow access to two new platforms.

After freeing the Gremlin he will active the boats, jump on the moving boats to get to the Second Gremlin Herman.

You can pay Herman E tickets to stop the whirlpool for you.

Now jump on the boats once again jumping onto the platform to your right thinning the blade of the fans as you go through a tunnel.

You will reach the steam valve which is another timed switch, so Mickey must act quickly! To make this easier thin the remaining fan blades to clear your path.

Asia Boat Ride – Part 2
The small cutscene will reveal the location of a red chest.

Use the area above the fan blades to access the red chest, to receive another bronze pin.

by repainting the gears in the machinery that Marvin mentioned, you will be able to reach the top of the temple.

Instead of jumping on the dragon use the moving platforms you painted to receive a gold pin.

Run to the moving spotted orange umbrella shape. You will now have to jump on a cloud on your left and proceed in jumping on the switch. You will have to do this twice to complete the mission.