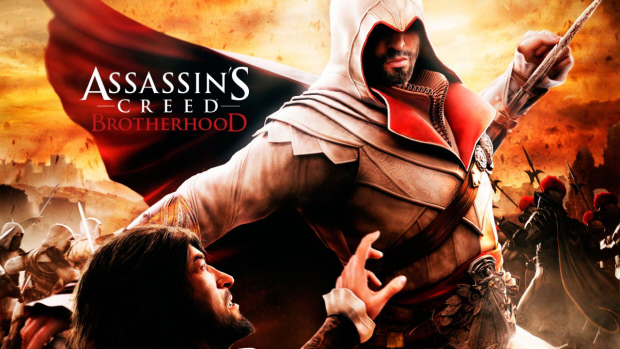 Our Assassin’s Creed: Brotherhood walkthrough will guide you through the beginning to ending moments of cutscenes and gameplay for this highly anticipated follow-up in the hit stealth action series from Ubisoft for Xbox 360 and PS3.

The critically acclaimed single-player experience of Assassin’s Creed is back and better than ever as Ezio returns in an epic struggle against the powerful Templar Order. Now a legendary Master Assassin, Ezio must journey into Italy’s greatest city, Rome, center of power, greed and corruption to strike at the heart of the enemy. Defeating the corrupt tyrants entrenched there will require not only strength, but leadership, as Ezio commands an entire Brotherhood that will rally to his side. Only by working together can the Assassins defeat their mortal enemies.

Please note: viewers must be at least age 18 to watch, as the game’s rated M for Mature. 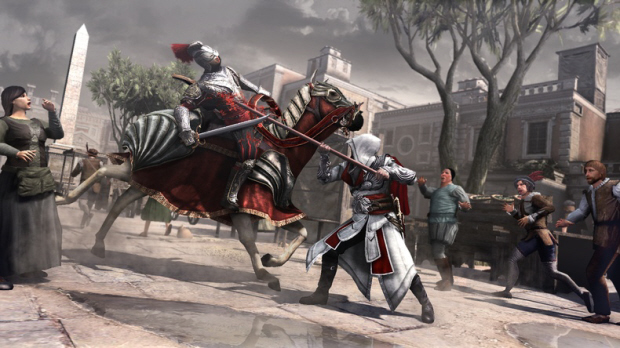 Although Desmond learned much through his contact with the Animus, it is clear that more essential data remains locked inside of Ezio’s memories. As this small band of Assassins races to safety, questions play through Desmond’s beleaguered mind and there is only one way he can answer them. Donning the numerous leads and electrodes of the Animus, Desmond prepares to return to Renaissance-era Italy in the hopes of solving a riddle that could spell doom for the entire planet.

Follow the onscreen instructions to use your eagle vision, Climb up and meet Mario. Follow on with Mario until Ezio and him come across a group of guards. Ezio has no problem slaying the soldiers as he has the ultimate armour from the end of Assassins Creed 2.

The final challenge of this memory is to follow Mario into the alleyways and jumping over the roof tops to get to the top of a tower. If you do somehow lose vision of Ezio’s Uncle Mario,look out for an arrow. This arrow will be located on the top of his head.

After a short horse ride with Mario to get to the centre of Monteriggioni.

There are 3 small memories to complete in Homecoming. They are each marked by a distinct “!” Icon on your mini map. Ezio must speak to the highlighted individual to initiate each task.

Ezio gets some much needed Rest and Recreation. In the centre of Monteriggioni a women needs Ezio to carry a box of flowers to a location close to Villa Auditore. (This is a mansion that dominates most of the northern part of the town).

Ezio must simply pick up the box of flowers with the empty hand button and follow the women to the waypoint.

In this memory Ezio needs to assist a man who has lost his horse. (This man is located outside the towns gate) Ezio must approach the horse with care, pressing the empty hand button before the horse can escape. Using your L button trot the horse back to his owner making your way to the way point.

In this mission there are a group of soldiers located on a wall just west of the main gate. Ezio can use the two lifts to reach the group of soldier. The individual Ezio needs to locate is actually asleep on the wall to the west a short sprint away, escort him back to the waypoint and engage in a little target practice.

After Ezio has completed these three tasks, head to the waypoint located at Villa Auditore’s front door and enter. Ezio must now head upstairs and interact with the highlighted door to continue.

Sprint over to the way point marker, it will be located on your left as you reach the top. You must now press the empty hand button to mount the cannon.
The final section introduces a number of different game play options, so follow the on screen instruction and prompts to complete this memory.

Tip: Your next available memory is always shown on your Mini-Map at the right-bottom side of your screen.

The Borgia attack Villa Monteriggioni. Defend it with canons, so that all villagers can flee, while uncle Mario leads a full frontal assault to defend the village.

As Ezio is wounded he’s unable to free run or sprint. Once you meet up with Claudia you must focus on protecting her. (The best way when fighting along side enemies is to sneak up behind them and slay them with a one-hit kill).

Following the instructions on using your new weapon the pistol. You can use the pistol to shoot the closest soldier to save the citizen.