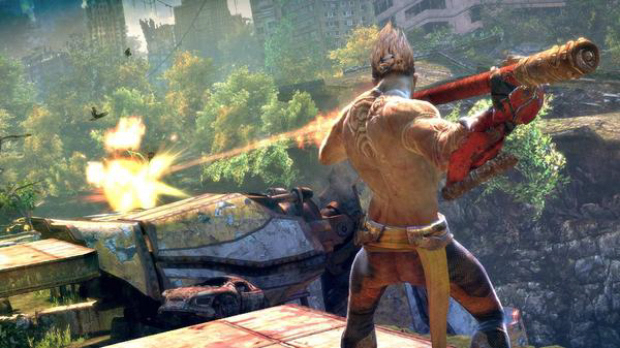 Enslaved 2 probably isn’t coming anytime soon, but a sequel to the well received first Enslaved: Odyssey to the West is not entirely out of the cards, says developer Ninja Theory head Tameem Antoniade.

Sadly though, it seems that things are more trending towards there NOT being a sequel than towards there being one. As the developer says that a story arc for an Enslaved series was never planned and that they did not hold back ideas for a sequel when developing the original game.

This goes against the current trend of the videogaming industry which is to immediately pump out a sequel and to hold ideas back for an eventual said sequel even while the first game is in development.

Essentially, all games are created with the intent of the publishers that there will be a sequel if the first game is even moderately successful. But that’s apparently not the case with Enslaved.

“For this game this is the one story, we focus everything on that one story and pretend there won’t be a sequel,” said Tameem Antoniades in an interview with CVG. “So no, we don’t have a big arc.”

Here is the launch trailer for the first Enslaved.

“We did Kung-Fu Chaos and there was no sequel for that. Heavenly Sword, there was no sequel for that. So we’re now in the mindset that there’s not going to be a sequel for Enslaved unless it’s miraculously successful. Well not miraculously, but we don’t assume it’s going to be successful. If there is going to be a sequel then you can probably think there will be two sequels and you can start planning that. There are ways to extend Enslaved out, I’m not worried about that. I just didn’t want to leave anything hanging – I hate that.” Currently Ninja Theory is working on the DMC Devil May Cry reboot for Capcom.

So there you go. It sounds like the likelihood of an Enslaved sequel is about as likely as a Heavenly Sword 2. Which means it’s not impossible, but don’t hold your breath.

Update September 2011: Ninja Theory’s Tameem Antoniades has said in a recent CVG interview that “Enslaved should have done better. Right now, we should have been doing a sequel and perfecting that sequel and doing what franchises do, which is get better over time. But because that didn’t happen, we’ve not expanded to two teams like we intended to. So we’ve remained a smaller shop. But now we get another chance with DMC.”

Apparently selling 730,000 copies of Enslaved wasn’t enough for Namco Bandai to request a sequel, or as Tameem says, maybe they just don’t have the manpower to make two games at the same time. Either way, he’s saying it’s not in development right now, not that it could never go into development. Hardly reassuring, as that would still leave a potential Enslaved 2 three to four years into the future if they start making it right after finishing DmC: Devil May Cry.