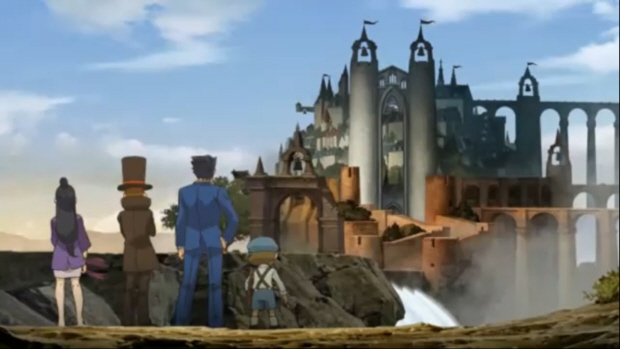 Professor Layton vs Phoenix Wright or Ace Attorney, has been announced for the Nintendo 3DS at Level-5’s Vision conference 2010, offering a crazy awesome crossover collaboration with Capcom that few saw coming. It will be released for 3DS in 2011.

Titled Layton Kyouju VS Gyakuten Saiban in Japan, the game has a story that is being penned by Shu Takumi who is the writer and designer behind the extremely popular Ace Attorney series. The game will attempt to faithfully mix elements from BOTH series into a cohesive whole. Mixing both the puzzle elements from Layton and the “Contradictions” elements from Ace Attorney.

The story will have both characters finding themselves in a new medieval city that’s unfamiliar to both and named “Labyrinth City”. In this mysterious town, magic and witches still exist, and recently stranger occurrences than normal have been taking place. The head of the town is “The Story Teller” who will play an obviously major role in this new tale.

Here is a video of the game in action!

Major characters from both franchises will make appearances in the game including: Professor Layton, Luke Triton, Phoenix Wright and Maya Fey.

Level-5 CEO Akihiro Hino is the mastermind behind this unique collaboration, and personally contacted Capcom to talk about combining the two major adventure franchises. Shu Takumi, Ace Attorney series’ designer was taken aback when he heard of the idea, but immediately was on board.

Much to the happiness of fans all over the world!