How to watch stereoscopic 3D without glasses, tutorial video 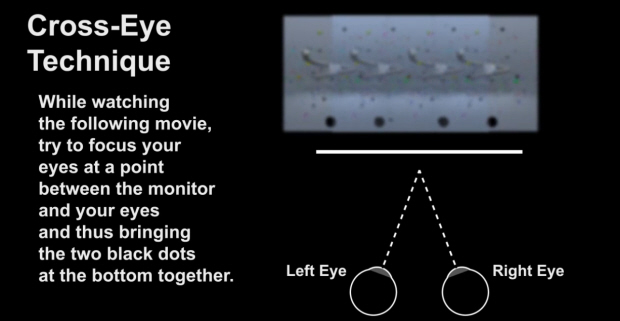 Want to watch glasses-free stereoscopic 3D right this very second? You can do so by using the “cross-eyed” technique as shown in this tutorial video.

By doing it correctly, you will mimic the way 3D works and can actually see a stereoscopic 3D image how it is supposed to be seen even on a regular 2D computer monitor and without wearing glasses. This could even allow you to get a better sense of what the 3D will be like in gameplay videos of 3DS games. Albeit, with some added cross-eyed-caused eye-strain.

This video walks you through the entire technique. Thankfully, there is no need to get cross-eyed with the upcoming Nintendo 3DS game system, which releases next Mach 2011.