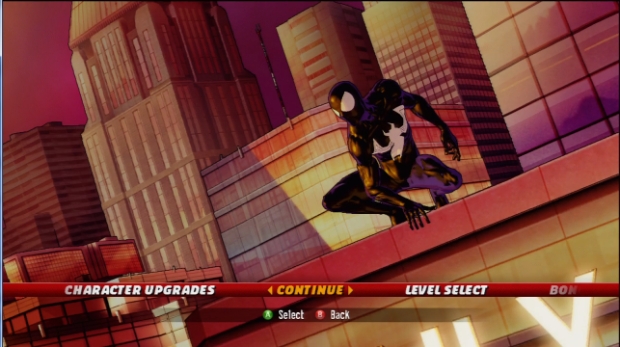 In this Spider-Man: Shattered Dimensions review you’ll get the truth no matter how bad it is, good thing this game is fantastic then! Spider-Man has a knack for getting in trouble, let’s see if he can get himself out of it this time.

Got no time to read the full review? Why not watch our awesome review of Spider-Man: Shattered Dimensions.

Hi everyone Jester here with my second ever review and this time it’s Spider Man Shattered Dimensions from Activision. So like the first what I’ll do is break the game up into a few categories and rate each one and by the end of it all we’ll have an overall score. If you want to see the game in action and see what all the fuss is about you can watch the review video, where I’ll cover the ups and downs of Spider Man Shattered Dimensions. For now though lets get into the review and as always I’ll start at graphics.

Graphics 7.
Okay so as a huge Spider Man fan this was a real treat for me getting to see 4 different incarnations of my friendly neighborhood wall crawler, do the graphics hold up? Oh yes, both the Ultimate and Amazing Spider Man dimensions have a very similar look that’s almost cell shaded and very comic looking.

The big graphical treats are most definitely the Noir and 2099 universes, both of these have a very distinct feel and hold up really well in the looks department, as you run through the 2099 universe you can see Spider Mans suit ripple with energy as he moves around a huge neon clad future city, with bustling sky traffic whizzing around everywhere.

The Noir dimension is pleasure to look at with a sepia overtone to the almost black and white levels, light and dark play a huge part in both the game play and the feel of this universe although some areas could have had a little more polish a really great looking game all round.

Game Play 7.
Now it’s onto the game play and what you can expect, each level is represented by it’s boss and you will unlock more as you progress through the game, you select your level and jump straight in. For clarity I’ll cover each of the dimensions individually starting with the Amazing Spider Man, for the most of these levels you will move through different fights between you and the levels themed enemies usually henchman of the levels boss, although there are many different combo’s to unlock through the web of shadows combat usually boils down to thumb numbing button mashing that can become slightly repetitive over time.

During some point in the mission you will need to rescue some poor souls from doom, this involves picking up these poor civilians and slinging them to safety and then it’s onto the boss battle that always serves as the highlight of each level.

The Ultimate universe is almost a carbon copy of the Amazing dimension, except now you have a new range of combat moves and the ability to use the rage feature of the black suit, a kind of turbo mode that See’s Spider Man letting loose with huge volleys of combo’s and destroying enemies left ,right and centre.

The 2099 dimension also has it’s own unique combat mechanic, accelerated vision a form of bullet time that allows Spidey to slow down time and maneuver around missiles and enemies alike, although not hugely different from the first 2 the unique look of this dimension seem to make it stand out more.

The Noir dimension is the only dimension where combat is not really the first approach, with a sneaking mechanic very similar to that of Batman’s Arkham Asylum, you use the shadows to creep up on unsuspecting enemies and pull them into the darkness slowly spreading fear throughout the remaining goons, the only problem is the take down mechanic is almost random as to when it will or wont grab an enemy leading to many a frustrating sneak session, throw in the standard save the civilians segment and instead of your regular grab em and go tactic you need to think out your approach and take out all those goons first.

Audio 7.
Every level is made to feel special and unique thanks to the really cool background audio, listening in on thugs in the noir levels, as the slowly become more and more scared of you is always going to make you smile.

Even more are the wise crack jokes between Spider Man and his enemies, Spidey always has something to say about every situation and sometimes it’s just a cheeky quip but very entertaining all round. Don’t be expecting fans to rush the stands for a copy of the soundtrack but as for game audio very fitting and always hilarious a solid 7/10

Ingenuity 6.
So is this the best Spider Man title ever produced? I wouldn’t go that far the beat em up sections are very repetitive and the save the civilians segments only prove entertaining if they are in the Noir dimension, where some thought is actually required, other wise they just seem like padding for an already slim level.

The gameplay is pretty standard and with no ability to free roam like previous titles it seems to be nothing more than an average beat em up, with a few borrowed gameplay ideas. The noir dimension is the only level that diverts slightly from the others with it’s focus on light and dark with sneaking around being a fundamental part of the level but this falls prey to the unreliable control system and just doesn’t feel like something new, more like a poor man remake of Arkham Asylum.

Though it may not break any new ground when it comes to ingenuity it’s still very well thought out and the web of shadows is a really fun way of unlocking goodies for your game, and always make you want to go back and try a certain level again just to kill 50 enemies using only ceramic pots.

Groundbreaking? No. Fun and entertaining? Yes!

Overall Fun-Factor 7.
A super Spidey title and although some elements may seem to be a little repetitive in some levels. Its sheer size and comic nature will have all you fans spun up for ages to come. With a pile of reasons to go back for one more go, Shattered Dimensions is a crazy all-round Spider-Man title with tons of stuff thrown in to keep fans and newcomers alike happy.

Whether it’s the crazy quirky comments or just trying to unlock that final challenge in the web of shadows, Shattered Dimensions delivers web slinging fun by the bucket loads and is a really great game for fans of Spider-Man.

I would love to know what you thought of the game, what kinda score would you have given to Spider-Man: Shattered Dimensions?